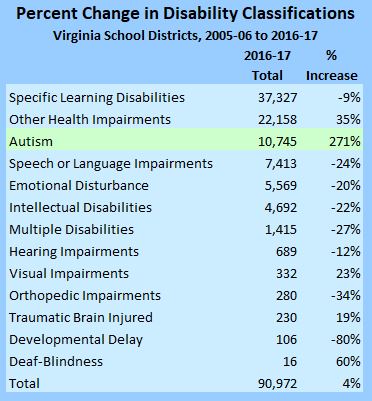 This chart reflects the number of children taking the SOL Reading tests. It may omit a few children who did not take the test.

The number of children with autism in Virginia public schools surged roughly 270% between the 2005-06 school year and the 2016-17 school year, far outpacing the modest increase in children with disabilities, according to data in the Virginia Department of Education SOL “Build-a-Table” database.

The table above shows the total number of children who took the Standard of Learning reading test in the 2016-17 school year as well as the percentage increase in the number from the 2005-2006 school year (the earliest year in the SOL build-a-table database).

Aside from autism, the only other major category that increased in numbers was “other health impairments.” Other categories in which symptoms might resemble those of autism — “emotional disturbance,” “multiple disabilities,” and “specific learning disabilities” — declined in numbers comparable to the increase in autism.

Bacon’s bottom line: Despite the common perception that the incidence of autism is increasing, there is a strong possibility that it’s the diagnosis of autism that is increasing. As a result, children falling into other disability categories are decreasing.

In a previous article I posted about autism, I noted that autism-related spending in public schools has increased significantly in recent years, putting fiscal pressure on local school systems and, indirectly, taxpayers. I’m not so certain that’s the case anymore. While the number children with autism may have increased, if many have been reclassified from other disabilities, the fiscal burden may not be increasing. The total number of all disabilities in Virginia schools (as measured by those taking the English SOLs) has increased only 4% over the 11-year period — hardly a cause for alarm.

These numbers do raise some interesting questions, though. Does the increase in number of autism diagnoses in Virginia’s K-12 population reflect a more acute understanding of the condition in the medical community and a spreading awareness in the general population? Alternatively, are there incentives in the system — more money allocated to children with autism compared to children with other disabilities — that encourage parents to favor the diagnosis? Is the increase in autism reclassification spread evenly across racial and socioeconomic groups, or is it more common in affluent households? If children with autism receive more resources, are affluent households the ones reaping the greatest benefit?

Whatever the case, these data suggest that the increasing diagnoses of autism may not portend a fiscal problem, as I had suggested in my earlier post. And that’s good news.

Bacon’s Rebellion… boldly asking the politically incorrect questions that could incite the wrath of the Twitter Outrage Mob so you don’t have to.

This entry was posted in Education (K-12), Health Care and tagged Autism, James A. Bacon. Bookmark the permalink.