Does Virginia Do Income-Verification for Medicaid Recipients? 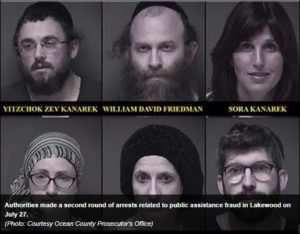 Just to be clear, cracking down on Medicaid fraud is not a “dog whistle” for targeting African-American welfare queens. Many if not most perpetrators of illegal schemes to collect public benefits are white, as illustrated by this cast of characters indicted last year in Lakewood, N.J. for illegally collecting Medicaid and other welfare benefits.

Last month a Louisiana state audit of 100 randomly selected Medicaid beneficiaries found that 82 did not qualify for the benefits they received. Most under-reported their income, some shamefully. Two recipients were getting Medicaid despite having incomes above $300,000.

Now, Louisiana is Louisiana, not exactly known for squeaky clean governance. But there is accumulating evidence that other states have similar problems. According to the Washington Times, a federal inspector general’s report this year found 38 out of a sample of 150 Medicaid beneficiaries in California were potentially ineligible.

The root problem is that the federal government has streamlined the Medicaid application process in an effort to enroll as many people as possible, contends Robert Doar, former commissioner of the New York City Human Resources Administration and a scholar in the right-of-center American Enterprise Institute. Regulators have told states they no longer have to run the traditional income checks.

Just because something is happening in Louisiana and California doesn’t mean it’s happening in Virginia. But we do know one thing. Enrollment in Virginia’s expanded Medicaid program has soared past initial expectations of 300,000 to 360,000 or more. Why would that be? Actuaries hired by the state goofed. But why did they goof? Is it possible that the lack of an income-verification procedure is allowing ineligible people to cash in?

Hopefully not. But income-verification is not an issue I’ve seen explored in the public discussion of Medicaid expansion. If Republican legislators are on the ball in the 2019 General Assembly session, they will query Northam administration officials to ensure that Virginia has procedures in place to prevent ineligible recipients from gaming the system and ripping off taxpayers.