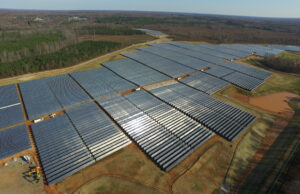 A Virginia GOP activist group aimed at suburban voters will be advocating repeal of the Virginia Clean Economy Act by the 2021 General Assembly, seeking to return a herd of cows that is well out of the barn and busting down the pasture fence.

The Suburban Virginia Republican Coalition has produced a short video (here) and is mounting a petition drive (here), both of which might have been helpful a year ago. Of course, a year ago the VCEA was just a bunch of closed conversations to which only Climate Crisis True Believers were invited. The final bill appeared out of thin air just before it got voted on.

The video focuses on just one aspect of the coming energy conversion, the plans to destroy 490 square miles of forests and farmland to cover the land with up to 30,000 megawatts-worth of solar panels. That may indeed be the least popular aspect with suburban Virginians, but the most expensive and risky part of the plan involves the coming offshore wind turbines.

On a parallel track in the opposite direction, the Climate Crisis True Believers are arguing that it was President-elect Joe Biden’s deep commitment to their cause that got him elected. A recent column in Virginia Mercury argued:

“In the home stretch of the 2020 campaign, presidential candidate Joe Biden leaned hard into the issue of climate change, giving a televised climate speech and running climate-focused ads in swing states. His campaign bet that this issue, once considered politically risky, would now be a winner.”

It seems more likely that the final tightening of the race, which produced such a painfully close outcome in key states, was driven by Biden’s late admission of his hostility to fossil fuels. You could see President Donald Trump’s final messaging on the topic moving votes his way in the oil and fracking regions.  Dreams of a Blue Texas and overall blue wave disappeared like smoke.

The VCEA votes in the General Assembly last year were almost but not totally party line. Senator Jill Vogel, R-Warrenton, supported it, perhaps with an eye on the Piedmont Environmental Council in her part of the state. Delegate Terry Kilgore, R-Gate City, voted for it because it was good for his local Dominion Energy coal plant, which survived to demonstrate how the environmental promises of the bill are just window dressing.

The 33-page bill itself changed about ten sections of the Code of Virginia and about a half dozen previous Acts of Assembly. A bill to truly disentangle that would probably be just as long or longer. Given how many people and companies will be getting rich off it over the next few years, the odds of success range from hopeless to impossible.

If a major effort is mounted to repeal it, that will simply take attention and energy away from the 2021 battles, whatever they turn out to be. Virginia is just getting started down the road toward a California-style energy economy, with its high costs and brownouts. The next carbon tax battle will over transportation fuels, with the Transportation and Climate Initiative.

Expect other issues. The pattern with both the environmental movement and its ally, Dominion Energy Virginia, is to misdirect, dissemble, and then strike suddenly with their real legislation in the form of a late substitute bill.

But if this GOP activist group becomes a vehicle for education of voters, if the discussion over destroying forests for solar panels leads to a deeper understanding of the entire issue, then that might be valuable. The only hope for a change of direction in the Commonwealth is for a different electoral outcome next November.

This video has some punch. A similar video raising questions about costs and unreliability of the offshore wind energy would be useful. People also remain largely ignorant that soon their monthly electric bills will include 1) the Regional Greenhouse Gas Initiative carbon tax, 2) the Percentage of Income Payment Plan tax to protect low income households from exploding costs and 3) an added charge to cover utility losses and late fees from the moratorium on disconnections.

The COVID-19 pandemic is real and the responses subject to experiment and testing. The real science on climate change does not support the alarmist agenda or heavy-handed interventions such as the VCEA. If the American people will pay the same level of attention to this invented emergency, the climate catastrophe narrative will quickly collapse. The 2021 General Assembly and subsequent election season are great places to start.