TCI: Taxing the Poor to Benefit the Rich

“I think TCI is just taxing poor people so that we can subsidize rich people’s electric cars.”

So said New Jersey’s Maria Lopez-Nuñez, Deputy Director, Organizing and Advocacy for the Ironbound Community Corporation. She was speaking during an online seminar September 29 organized by Transportation and Climate Initiative advocates.

That particular comment can be heard at about 3:10 into this recording of her speech. The full meeting is recorded here, and her remarks start at about 1hour and 43 minutes in. Listen to her whole speech if you can. Listen to those that follow and you will learn she was not alone.

Lopez-Nunez is dead on correct that TCI imposes a major and very regressive tax to deliver minor reductions in CO2 emissions, and that moving people into electric cars merely moves the source of CO2 emissions from the roads to the power plants.

Run the projected CO2 emissions savings from TCI through the climate change models at the heart of this whole worldwide debate and the result is infinitesimal changes in the feared future temperature increases. Selling this as saving the planet is not credible, so the push is on to find a new rationale. The effort to make that “environmental justice” by targeting the tax money to their causes is not being well received.

Earlier this week, Governor Charlie Baker of Massachusetts indicated he and other governors are reconsidering this new tax and cap scheme for fuels in the middle of a deep recession. The discontent flowing back from the low-income, racial-justice and environmental-justice crowd TCI sought to recruit may also be weighing on their minds. 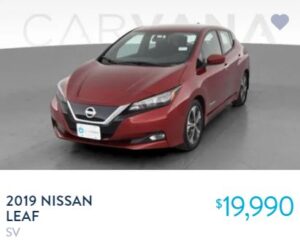 That is a typical used price. One promoted use of the TCI carbon tax extracted from all gas or diesel purchases would be subsidies for electric cars.

Our Governor Ralph Northam has said nothing about his plans in Virginia, or whether he was one of those Baker was discussing. The Virginia media is not asking. Despite the short time left before the session, the actual memorandum of understanding is still being held secret.

Lopez-Nunez’s comments during the meeting were followed by a formal call from her organization for New Jersey to reject membership in the 12-state compact with its carbon tax on gasoline. Her group’s denunciation was joined by Clean Water Action New Jersey and NJ Environmental Justice Alliance.

Their complaints are spelled out in a release. They state TCI:

“TCI to date has been tone deaf at best and racist at worst,” Lopez-Nunez is quoted in the release. “The world is on fire and we need bold, visionary solutions that center those most directly impacted to build a just society. We will not settle for half measures that uphold decades of bad policy development in the way TCI has.”

The 2021 Virginia General Assembly will be asked to authorize Virginia’s membership in TCI. It should be done in legislation, but there is a chance the Northam Administration will try to sneak it through with budget language. The basic workings of the compact have been explained before and will be again, but many details are still shrouded in that missing MOU. Will we see it before or after the legislators are asked to vote?

The first carbon tax to be imposed on Virginians, part of a similar interstate compact known as the Regional Greenhouse Gas Initiative, will add about 2% to electric bills starting next summer. Early information from TCI has mentioned that the carbon allowance will add about 17 cents per gallon to the price of gasoline (about an 8% increase), but its own internal documents point to a first year cost more like 20 cents per gallon, growing to more than 30 cents by 2032. A review requested by the Thomas Jefferson Institute for Public Policy projected 33 cents per gallon.

The proposed 25-percent reduction in CO2 emissions from fossil fuels will be accomplished not by the tax, but by a cap on the sale of gasoline and diesel fuel within the Maine to Virginia region. The number of allowances available under the cap to fuel wholesalers will slowly shrink. With a market move already underway to electric or hybrid vehicles, much of the goal will be achieved without this regime.