Why Are Nursing Home Workers Refusing to Get Vaccinated? 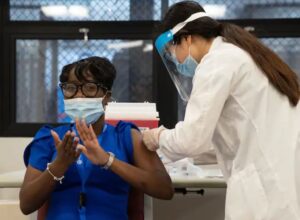 An apparent exception to the rule: a nursing home worker in New York gets a vaccination. Credit: Yuki Iwamura/AP and the Washington Post.

A large percentage of nursing home workers in Northern Virginia and the Washington metropolitan area have declined to take the COVID-19 vaccine. Their wariness, reports The Washington Post, arises from “online misinformation about the vaccine” and “historical mistrust of the medical system of which they are a part.”

Forty-eight percent of all COVID-19 related fatalities in Virginia have occurred in long-term care facilities. Despite strict lockdown protocols, the disease enters facilities by piggybacking on employees. Vaccinating nurses and other employees at long-term facilities is critical to stemming the infection of vulnerable elderly residents.

WaPo cites the example of Trio Healthcare, which operates 11 nursing homes in Virginia. Chief Clinical Officer Melissa Green said employees initially bought into various myths about the vaccine, which included rumors that they had serious side effects and conspiracy theories about government plans to implant microchip in residents.

Then, of course, there’s America’s long history of racism. Writes the Post:

David Grabowski, a Harvard University health policy professor, said the numbers shouldn’t surprise anyone familiar with long-term care facilities, where low wages and poor labor conditions — and earlier missteps fighting the coronavirus pandemic — have created a well of mistrust, especially among the Black and Latino workers who dominate the industry.

“This is a forgotten workforce that hasn’t been treated well for years,” Grabowski said. “We’ve been slow with [personal protective equipment], we’ve been slow with hazard pay, and all of a sudden now, they want to go fast with vaccinations. … There’s good reason they’re so distrustful.”

Another example: The Rev. Derrick DeWitt, director of a nursing home in Baltimore, cited online misinformation and “mistrust of the medical establishment, fueled by historical abuses like the Tuskegee syphilis study and the ongoing lack of access to medical care in Baltimore’s communities of color.”

Ah, Tuskegee again. The Tuskegee syphilis debacle comes up over and over.

The Tuskegee syphilis experiments, began in 1932, were conducted on African-American males. Without their informed consent, men were given placebos as scientists documented the long-term effects of the disease. The study ran until 1972, when it was exposed and shut down. The experiment was a stain upon the U.S. medical research profession, and it deserves its reputation as “the most infamous biomedical research study in U.S. history.”

But here’s a News flash: The experiment ended 48 years ago. A lot has changed since then, both in terms of race relations and in biomedical ethics. Conducting such an experiment today would be unthinkable.

And speaking of information appearing on the Internet, let’s consider this:

Why do we think, God willing, when we get a vaccine — that is good, works — why do we think the public is gonna line up to be willing to take the injection? We’ve lost so much confidence, the American people, in what’s said [by the Trump administration].

That September quote, reported without critical comment by the media, came from the man who now is president, Joe Biden.

Media outlets like The Washington Post stoke mistrust of the healthcare system  to support its preferred editorial narratives. Should anyone be surprised that concerns about the vaccine are widespread?

Who needs anti-vaxxer theories when you’ve got the mainstream media accomplishing the same goal through the back door?