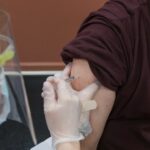 The bad news? At that rate it will take about two years to inoculate every adult in the city against Covid-19.

If you read this space daily you know that hundreds of those folks waited outside the Convention Center in the raw drizzle Monday. Few of them were older than 65, the age group most at risk for complications from Covid-19.

When I spoke yesterday with Ed Brazle, EMS Chief and co-commander of Vaccinate Virginia Beach, he said he hoped to vaccinate another 3,000 folks today by quitting time. Rinse and repeat until all the doses are gone.

This should exhaust the measly 9,000-dose allotment the Beach received this week.

That’s a ridiculously small number of doses for a city of more than 450,000. Why is Richmond being so stingy?

Someone needs to remind the governor that Virginia Beach is the largest city in the commonwealth. Heck, only 42.22 percent of the vaccine delivered to the Old Dominion has found its way into arms so far, meaning that Virginia now ranks 50th in the nation for delivery of vaccines.

There’s no way to spin that and no way to blame Donald Trump. Ralph Northam’s administration was unprepared and Virginians are paying the price.

When the Beach moved to Phase 1B on Monday, there were 24 to 30 vaccination stations in the Center. Today there will be 40, Brazle pledged. That should speed up the process and cut wait times. Plus those seeking a second dose will now have to make appointments. On Monday, 250 of those looking for a second shot had to be sandwiched into the schedule.

Best of all, those in line today will be waiting indoors, not out, Brazle said.

Brazle told me that almost all of those vaccinated so far were pre-registered through their workplaces. These included teachers, healthcare workers, nursing home staff, daycare workers, frontline city workers, doctors’ office workers and court employees.

On Monday, however, the online portal opened to the general public and everyone over the age of 65 became eligible to sign up. So far, 45,000 people have pre-registered.

How long till they receive the vaccine?

“It could be weeks or months,” Brazle sighed. “Just depends on how much vaccine we get.”

Brazle said the city is ready to go into overdrive if a large number of doses suddenly appear. Ideally, he’d like to be vaccinating 5,000 folks a day. As it is, he has to look at what the state is shipping our way each week and plan accordingly.

The chief said he’s been asked why the city doesn’t offer drive-thru vaccines. Not practical, Brazle said. It’s slow, plus it forces workers to be outside for hours in January weather.

Brazle’s been with the EMS since 1996 and knows what he’s doing. He saw problems on Monday and is fixing them today.

Still it seems there ought to be at least one drive-thru location for the elderly who can’t walk long distances. Getting a shot from the comfort of your own car is preferable to hoofing it across the acres of parking lots at the convention center into the cavernous building.

Here’s an idea: Workers at the drive-thru could be recruited from Chick-fil-A. Those kids know how to keep a crowd moving.

An earlier version of this post said vaccines were only being administered on Monday, Wednesday and Friday this week. That was incorrect.