Looking in the Rearview While the Economy Crashes

Want to see an out-of-touch congressperson in action? Take a gander at Rep. Elaine Luria’s Twitter feed over the past 24 hours: 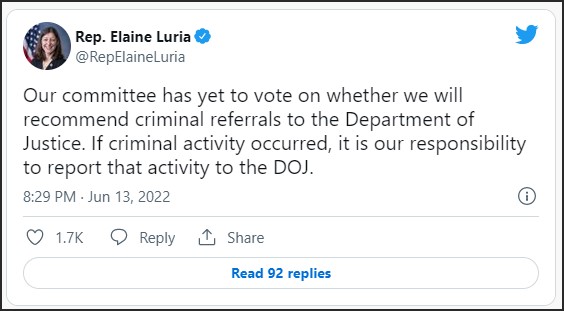 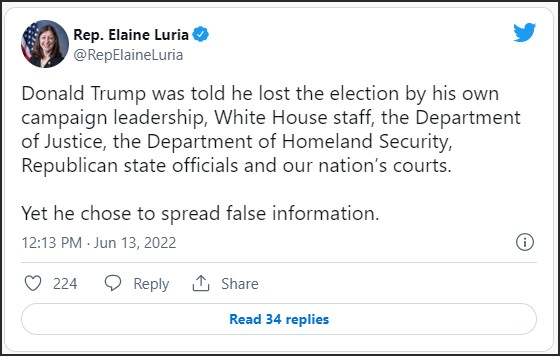 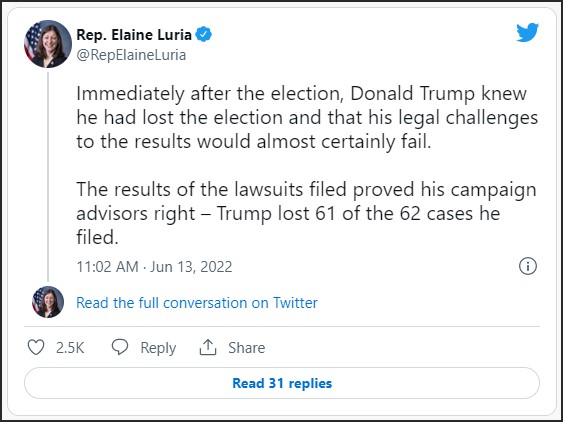 Literally dozens of Tweets about January 6th and Trump. Not a single word about gas prices, inflation or the crashing stock market.

Is this what the voters of the 2nd District will care about on Election Day?

Either Luria is taking campaign advice from loser Terry “Trump, Trump, Trump” McAuliffe, or she’s already conceded the race and has decided that her life’s work will be spent obsessing over someone who lost the presidency and who was impeached twice, or she’s playing the dutiful Democrat and trying to create a distraction from the crashing economy before she loses her race.

I’ve got news for Luria and any other Democrats who think the January 6th hearings are going to cause voters to flock to the polling places to send them back to Washington for another term: You’re insane.

This is just another sign that these politicians spend too much time in the Washington bubble while losing touch with the ordinary, decent people back in their districts.

Hard-working people like the owner of a painting company who told me yesterday that he spent $6,000 last month on gas for his team of painters – some live as far away as Newport News and come to Virginia Beach to work on jobs.

Or the gas station manager who told me yesterday that his owner notified him yesterday to raise the price of gas 10 cents by the end of business.

He didn’t mention January 6th, either.

Or the guy who owns a lawn service company that employs a handful of workers. Every single piece of equipment they use is gas-powered. They’re afraid to raise prices, he says, because he fears his customers will just start mowing their own grass.

I guarantee you, he doesn’t care about January 6th.

Or the young mom pumping gas next to me at Kroger last week who was doing that delicate trigger thing with the pump, trying to put in exactly 20 bucks-worth of gas.

I doubt she was thinking about January 6th as she fretted about how far she could get on four gallons of gas.

How about the retirees who are watching their life savings vanish in their IRAs as the stock market plummets and they’re suddenly faced with a very different lifestyle than the one they thought they had planned for?

How about the military families — they’re slated to get 2.7% pay raises this year, which may get bumped up to 4.6% — who are struggling to put food on the table and gas in their cars? Luria professes deep concern for service members, yet I can guarantee that the enlisted Navy wife who’s feeding her kids beans from the commissary doesn’t give a rat’s patootie about Jan. 6th. She cares very much about her family, however.

This economy isn’t just rocky, it’s an unmitigated disaster. Wealthy Americans, like Luria, are insulated from it.

Someone tell Luria — the star of Sunday‘s “Meet The Press” — that Trump is no longer president. He was already impeached over January 6th and those involved have been arrested and await trials.

The riot at the Capitol on January 6th was ugly and awful. Trump bears much of the blame for his supporters behaving like animals. If he’s indicted over the actions it might do the GOP a favor, as they can then nominate Ron DeSantis and win 48 states. Still, Luria’s singular obsession with the hearings seems tone-deaf when Americans are suffering under out-of-control inflation.

Unless I’m reading the electorate wrong, voters in the 2nd District don’t want to spend time looking in the rearview. They want to know what actions Luria and her Democrat pals are taking to reverse the course of Biden’s disastrous economy.

The answer to that: Nothing.