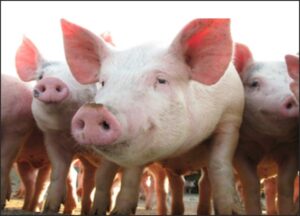 Virginia-based Smithfield Foods has announced its intention to close its Vernon, Calif., meat-packing plant, which employs 1,800 people and pays $21 per hour on average. The company cited “high costs and over-regulation” for the decision. The costs of doing business in California “are significantly higher than other states where we operate,” said Jim Monroe, Smithfield vice president for corporate affairs.

According to The Wall Street Journal, the cost of utilities is 3.5 times higher per head to produce pork compared to the 45 other U.S. states where Smithfield operates. Smithfield also cited California law that requires farmers to give hens, sows, and veal calves more living space. Meanwhile, pig farmers are cutting back as the cost of feed, farm labor and material increases.

The Smithfield news follows close on the heels of the announcement that inflation reached 8.6% over the past 12 months. The Smithfield decision won’t help matters. Shrinking meat-packing capacity will add to upward pressure on bacon, pork and sausage prices and, thus, the overall price of groceries.

The price of goods and services is set by supply and demand. Demand has been inflated by massive federal deficit spending and the decision of the Federal Reserve Bank to monetize that debt, pumping up the money supply and putting more money into the hands of investors and consumers. That is the primary cause of the spike in inflation. But regulatory policies restricting the supply side contribute as well.

For example, the Biden administration has done everything within the power of the executive to restrict the supply of fossil fuel production and transportation. The consequences of those actions arguably have yet to be felt, but they will constrain oil and gas production in the future. Likewise, Smithfield’s decision will have minimal impact on the price of pork products today, but it will suppress the supply, and hence increase the price, in the future.

One can argue that shutting down the fossil fuel industry will save the planet. Likewise, one can argue that mandating better conditions for pigs, hens and calves is the moral thing to do. But regulatory actions have consequences. And when most government mandates have the effect of restricting rather than boosting supply, you can be sure that inflation will not be a “transitory” phenomenon.

The median family income in Virginia is about $74,000 a year. The loss of purchasing power from 8.6% inflation is equivalent to $6,400. That silent tax is the consequence of monetizing the trillion-dollar deficits and saddling the private sector with hundreds of billions of dollars in regulatory costs.

Bear that in mind the next time you shovel a piece of yummy, delicious, nutritious bacon into your mouth — assuming you can afford to buy it anymore.