“The Dreadful Frauds” — a CRT Take-Down 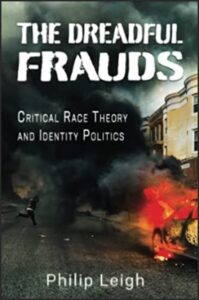 As Wokeism plays an increasingly dominant role in our society, conservatives and even  liberals have begun subjecting the ideology to close scrutiny. Perhaps the most brilliant dissection comes from John McWhorter, an African-American and an old-school liberal. In Woke Racism: How a New Religion Has Betrayed Black America, McWhorter makes the case that Woke doctrine is an unfalsifiable, philosophical jumble that is embraced as a matter of secular (godless) religious faith.

Other indispensable readings are the Madness of Crowds and The War on the West, by gay English journalist Douglas Murray. In the latter volume, Murray argues that wokeism is part of a larger assault on reason, the Enlightenment, indeed all of Western Civilization. The movement to topple Confederate statues morphed into a movement to demonize and de-memorialize slave holders, and then anyone else (which includes just about everyone before the mid-2oth century) who held views on race that are now regarded as retrograde, all the while giving a pass to genocides and mass murders committed by Marxists and non-Westerners.

If you have an interest in the intellectual forces tearing our society apart, I recommend those works highly. While reading McWhorter and Murray, you might consider also a slender volume, The Dreadful Frauds: Critical Race Theory and Identity Politics, by Philip Leigh. Where McWhorter and Murray delve deeply into the ideology of wokeism, Leigh provides a useful survey of its application in the United States.

Leigh may be familiar to Bacon’s Rebellion readers, as we have published several of his columns here and reviewed his book, Southern Reconstruction. While the demonstrable lie is endlessly repeated that Virginia public schools failed before the woke revolution to teach the history of slavery, Reconstruction, Jim Crow and racism, Leigh’s recounting makes it clear that the version of Reconstruction that most of us learned in school is indeed incomplete. The standard account glides over how Northerners despoiled the South after the Civil War, giving rise to resentments and political movements in a complex interplay that culminated with the Jim Crow regime. Institutional segregation and racism, he argues, were not the natural and inevitable extension of slavery in Southern culture.

Leigh, who also publishes columns and commentary on his blog Civil War Chat, has prominently defended Robert E. Lee not only as a brilliant general and exemplar of personal virtue, but an American hero who was key to reconciling the South to its defeat by the North and its reintegration into the Union.

Dreadful Frauds casts a wider net, starting with a thumbnail description of the theory behind Critical Race Theory and a description of how the ideology now permeates American society from universities to the military to Big Tech. While his primary focus is on racial identity politics, he also explores radical feminism.

Be forewarned: Leigh is preaching to the converted. If you sit in the pews of conservatism, you will appreciate zingers such as this take-down of a lamentation of the gender pay gap by billionaire feminist Facebook executive Sheryl Sandberg: “In truth, Sandberg may be the world’s most overpaid woman. Among all female leaders she is the most prone to stand in the spotlight when her company succeeds but is normally off camera when CEO Zuckerberg stands alone to face his critics.”

I found refreshing his critique of CRT popularizer Ibram Kendi. While criticizing “racism” in the attitudes of Whites, Kendi has engaged in derogatory racial stereotyping himself. In “How to Be an Antiracist,” Kendi described moving from New York to a high school in Northern Virginia. Observes Leigh:

His preformed imaginings about the neighboring whites traumatized him. Although 1999 Northern Virginia was not Southern in any traditional sense the then fifteen-year-old Kendi wrote, “Our first night there, I stayed up all night, occasionally looking out the window, worried that the Ku Klux Klan would arrive any minute.

Kendi also stereotypes Blacks from the Caribbean and Africa. In Kendi’s appraisal, immigrant Blacks have a condescending attitude toward American-born Blacks. As a youth he returned the negative sentiment, Leigh writes. “Kendi admits that he and his public-school classmates ridiculed black refugee immigrants but ironically does not see himself as an oppressor.” Of course, in Kendi’s mind, Blacks cannot be racist — by definition. Only Whites can be.

As a conservative polemic, The Dreadful Frauds will not change anyone’s mind. But if you’re inclined to agree with Leigh to begin with, the book provides abundant ammunition to strengthen your convictions that Critical Race Theory is the bane of American society.

This entry was posted in Book review and tagged James A. Bacon. Bookmark the permalink.