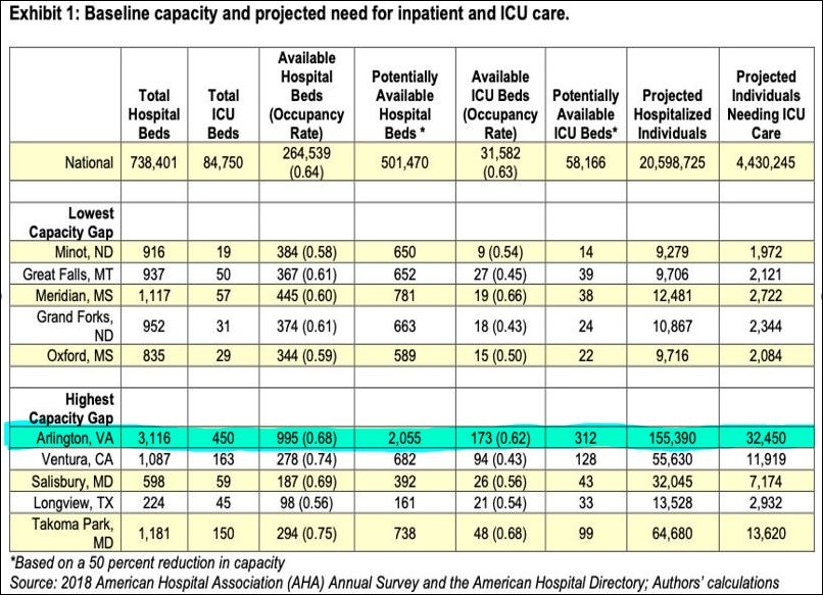 The Arlington hospital referral region had the highest ICU capacity gap in the country in this 2018 American Hospital Association survey.

The Northern Virginia Community Hospital in Arlington was bought by HCA in 2002.  The Arlington facility was closed in 2006 to comply with a 2005 Certificate of Public Need (COPN) decision that required HCA provide “trade-in” beds in the same health region to gain state permission to build a hospital in Loudoun County. (See this Washington Business Journal story. You will see that the business press knew the deal back in 2002.)

Regular Virginians have to ask why in the world HCA was required to buy and close the Arlington facility to build 30 miles away in Loudon County. And why in the world was the state involved in such a business decision in the first place?

In approving that application, the Health Commissioner reversed the recommendation of the DCOPN staff. We don’t know the reasoning for either the staff recommendation or the Commissioner’s reversal. Was some formula used? Why did Arlington, with its population far higher than when Arlington Hospital Center (now the only hospital in Arlington) was built, suddenly need fewer hospital and ICU beds? We know only the outcome.

The Commissioner was presented with a Hobson’s choice as a result of esoteric COPN rules devised by the VDH itself. A hospital in Arlington or a hospital in Loudon?  “Both” was not historically an available decision. After 47 years of COPN, that is what has evolved.

The Department of Health COPN Division should examine its records to determine the reasoning behind that decision and report its findings to Virginians through the current Commissioner.

Additionally, VDH had legislative authority to request proposals to renovate and operate the Arlington facility where it was or replace it nearby, but it did not. So we are left to assume that the Commissioner or the staff or both assessed that Arlington did not need the capacity.

As a direct result, the Arlington County health district tops a national list[1] of inpatient and ICU bed shortages for COVID-19 response.

I ask General Assembly leaders to send a bipartisan letter to the Department of Health asking for a review and report on that decision. It has had devastating effects on readiness and public health in this crisis. People may die from it. There needs to be accountability. And there needs to be change.

The COPN law was designed to create and preserve scarcity to protect incumbent hospitals from competition and ensure their profitability. I personally trust in the business judgement of the major corporations that wish to add medical resources more than the judgment of one gubernatorial appointee with the power of Nero. That madness needs to stop. COPN needs to stop.

This entry was posted in Health Care and tagged COPN, COVID-19, James Sherlock. Bookmark the permalink.