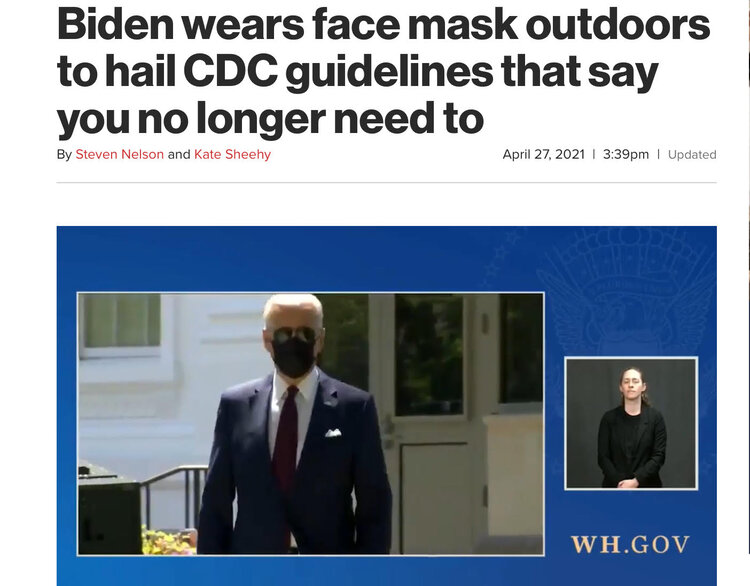 It’s official. The CDC is run by wankers.

These fools constantly move the goalposts – remember 15 days to slow the spread? Remember just wear a mask for 100 days? – and issue rules that no one with a lick of common sense would follow. Let alone anyone who took high school science.

The CDC declared that it’s safe for all of us – the vaccinated and unvaccinated alike – to go maskless when we bike, run or walk with members of our households.

Now who’s going to tell these clowns that those are things most of us have been doing all along?

Oh, and as a reward for being immunized, vaccinated folks can now dine unmasked! At outdoor restaurants!

Ooops. We’re ahead of them on that one, too.

But woe to the vaccine hesitant:

Unvaccinated people…should wear masks at small outdoor gatherings that include other unvaccinated people, the CDC says. They also should keep their faces covered when dining at outdoor restaurants with friends from multiple households.

Prediction: Not going to happen. We were all unvaccinated a couple of months ago. Many of us were dining indoors as well as outdoors.

These folks need to get out more.

And everyone, fully vaccinated or not, should keep wearing masks at crowded outdoor events such as concerts or sporting events, the CDC says.

The agency continues to recommend masks at indoor public places, such as hair salons, restaurants, shopping centers, gyms, museums and movie theaters, saying that is still the safer course even for vaccinated people.

So they’re saying the vaccines don’t work indoors or in large crowds.

It’s almost as if the experts running the country don’t really want people to get the vaccine. Or worse, they want to keep the public trembling in fear even after they’ve taken the shots.

Get a load of the president yesterday as he emerged – alone – from the White House to announce that vaccinated people could now venture outdoors without a mask.