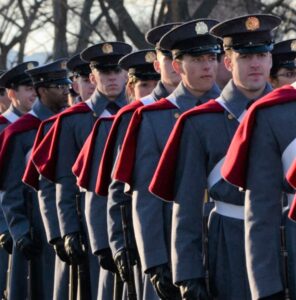 According to interviews with 12 African Americans who attended VMI at the same time as Governor Ralph Northam around 1980, black cadets endured frequent racist insults. They were uncomfortable with the veneration of Confederate general Stonewall Jackson. Some believed blacks were disproportionately harassed in the Ratline, and some said they were discounted for leadership positions because of their race. Two insisted that the Honor Court expelled them for cheating they did not commit.

Some of the anecdotes make for distressing reading. There is value in reminding ourselves what the African-American pioneers of integration at VMI had to endure. My problem is not with the perspectives highlighted by the Post but the perspectives that were ignored because they don’t fit its narrative of persistent and ongoing systemic racism. The country has changed in the past 40 years, but the Post won’t admit it.

Reporter Ian Shapira draws a straight line between the racism of 40 years past and racism at the Institute today. He quotes Darren McDew, who graduated from VMI and became a four-star Air Force General. “I’ve been saddened by what I’ve read about VMI,” he said, “but I am not surprised. No organization is immune from these problems.”

Some VMI alumni may resent Northam for ordering the probe, but McDew isn’t among them. He supports the investigation.

“I made an assumption, like many graduates who leave their institutions, that things were slowly progressing and that things couldn’t get worse,” McDew said. “I never put in my mind that the school could still be grappling in this manner with the things I saw 40 years ago. In hindsight, that’s a bit naive, because the country is dealing with all of these isms.”

The probe to which McDew alludes is the “equity audit” and racism investigation ordered by Governor Ralph Northam after a series of Post articles alleging that “relentless racism” continues at VMI today.

Apparently, Shapira ran out of modern-day racism stories to tell, so he dug way back in history to find some more. Here are angles he has yet to explore in his zeal to humble the Institute:

In sum, is there anything positive about the VMI experience for black cadets? If there is, Shapira mentions it only incidentally in any of his articles, and he never explores the possibilities in any depth.

For example, Shapira does concede that several of the black alumni he interviewed still feel a strong loyalty to VMI. Some continue to wear a VMI ring, even though it bears an image of the Stonewall Jackson statue.

“If the ring was just of Stonewall Jackson, I wouldn’t wear it,” said Donald Mitchell, who would go on to become one of the first black Special Operations helicopter pilots in the Air Force. “The ring tells people that you persevered and went through something more difficult than what most college kids go through.”

Ron Carter, a basketball athlete who played with the Los Angeles Lakers after graduation and then became an administrator with the U.S. Department of Housing and Urban Development, also experienced racism but said he loved his VMI experience.

But it never occurs to Shapira to ask (or if he asks, to report) what exactly did Carter and others value from that experience? Other than noting that Carter considered Bill Blair, his white basketball coach, a father figure, Shapira never explores the question.

In Shapira’s telling, VMI was a hell-hole for African-Americans then, as it is now. He tells snippets of the VMI story that makes supporters hang their heads in shame — but nothing else — and he portrays those snippets as the entire picture. In the process he reduces complex and evolving reality into a black-and-white morality tale that does violence to the truth.

This entry was posted in Education (higher ed), Race and race relations and tagged James A. Bacon, Virginia Military Institute. Bookmark the permalink.