Why the Enrollment Decline at VMI? Look to White Males for an Explanation. 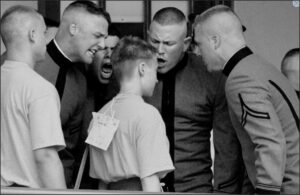 This photo, taken in 1997, shows a female VMI Rat, Megan Smith, undergoing a grilling by upper class cadets during Hell Week. The Washington Post republished the photo last week to mark the 25th anniversary of women entering VMI, effectively reinforcing the image of VMI as a sexist institution. Remarkably, when staff writer Ian Shapira tracked her down in southern France, where she now works as an attorney, Smith (now Megan Portavoce) said the photo was taken out of context. “I looked liked … I was scared. But I didn’t feel scared,” she said. “I think the photo is often taken out of context. It’s used as proof of harassment towards women. But it was equal opportunity harassment that day.” Male freshmen were verbally abused, too, she said. “Everyone gets yelled at. They just find something to needle you with, to get under your skin. It’s part of the system of testing everyone.”

When the Virginia Military Institute re-opened for its fall semester Monday with its usual parade-ground pageantry, it counted only 375 cadets in the 1st-year class. That’s down 24% from 494 the previous year.

“We believe there are a number of contributing factors,” says VMI spokesman Bill Wyatt. “Schools throughout the commonwealth and the nation are dealing with similar declines.” Nationally, there are 1.3 million fewer first-time college students this year than last, so VMI is competing for a smaller number of applicants. Moreover, the COVID pandemic depressed attendance at VMI’s open house program, he says. Personal tours are critical for showcasing the military academy’s unique value proposition.

But others offer different explanations. A large alumni contingent has been unhappy with developments at VMI since The Washington Post and former Governor Ralph Northam painted the academy as a relentlessly racist and sexist institution. They point to the wave of negative publicity generated by a Northam-ordered investigation into racism and sexism that was amplified by the media. These alumni also charge that the infiltration of leftist ideology at VMI is turning off families who still respect its core traditions of honor, character and patriotism.

“If the public believes VMI is racist and sexist, not to mention now woke,” says Carmen Villani, a vocal critic, “who wants to send their sons or daughters there?” (See his column accompanying this one.)

In seeming fulfillment of the alumni critique, the Post last week published a retrospective upon the occasion of the 25th anniversary of women first admitted to VMI. It led with a photo of a slight 1st-year woman, Megan Smith, being shouted at by hulking, grimacing, blood vessel-popping males. The headline to last week’s story: “VMI’s male cadets were berating her. The 1997 Hell Week photo went viral.”

An honest accounting of VMI’s plummeting 1st-year enrollment would acknowledge that both VMI and its critics have valid points.

It is indisputable that, as Wyatt says, the number of college-bound youth is in decline nationally. “High school graduates are simply fewer in number and are choosing to go directly into the workforce at a higher rate than before,” he says. “Additionally, the numbers of high schools who took the SAT and ACT declined. These standardized tests have traditionally been a source for prospective applicants to self-identify their interest in attending a military college.”

VMI is concerned enough by the fall-off in matriculations, Wyatt says, “that it intends to conduct “a competitive analysis” and will launch a “strategic enrollment management initiative” this year to develop a “long-range recruitment and retention plan.”

But alumni critics are right to observe that there is more to the story. While college enrollment is declining nationally, the downturn is far worse at VMI, they contend.

A barrage of negative publicity from The Washington Post, the newspaper with the largest circulation in Virginia, has cast VMI in a consistently negative light on the military academy over the past two years.

Since September 9, 2020, when The Post published his article entitled, “At VMI, Black Alumni Want Stonewall Jackson’s Statue Removed. The School Refuses,” staff writer Ian Shapira has written 36 stories about VMI. Literally each one has been critical of the institution or of conservative alumni who have striven to uphold its traditions. On the basis of anecdotal information Shapira has repetitively made the case that VMI as an institution is racist and sexist. Similar stories have appeared in other media outlets, although none have been has relentlessly critical as the Post.

Given the portrayal of VMI as racist and sexist, one might speculate that Blacks, women and minorities would be turned off. But the opposite appears to be the case. Matriculation of minorities at VMI is up sharply this year compared to last year (2021-22), the number of women is down slightly, and the number  of Whites and males is down precipitously. 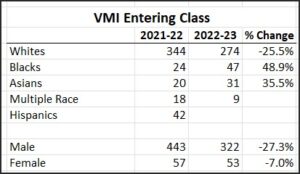 The 2022-23 numbers have not been published officially yet. I got them from VMI spokesman Wyatt. Complicating any analysis is the fact that the VMI Data Dashboard, which provides the historical data, includes Hispanic as a racial/ethnic category, while Wyatt’s data does not. Wyatt’s data allocates this year’s 35 Hispanics between Whites and Blacks, which would indicate that the decline in White matriculation is even sharper than indicated in the table above, while the increase in Black enrollment is somewhat less pronounced.

Bottom line: The decline in the size of VMI’s entering class can be explained almost entirely by plummeting numbers of White male cadets. Any analysis of what’s happening at VMI must put that fact front and center.

One plausible explanation is that families sending their children to VMI tend to be more culturally and politically conservative and more likely to respond viscerally to loose accusations of racism and sexism. They also know the Institute has been undergoing profound changes in the recent past: removing the Stonewall Jackson statue, modifying the honor code “drum out ceremony,” and institutionalizing Diversity, Equity & Inclusion programs, which they fear are loaded with leftist cant.

Conversely, Black and other minority students might feel, despite the outpouring of negative publicity, that VMI is changing and that the changes augur well for them.

Another factor to be considered is the VMI admissions policies. To what degree, if any, has VMI sought to remake the demographic make-up of the Cadet corps through admissions and scholarships? Answering that question would require gaining access to data that the Institute does not publish.

In the final analysis, if you want to know why VMI’s enrollment is in decline, ask the White males.