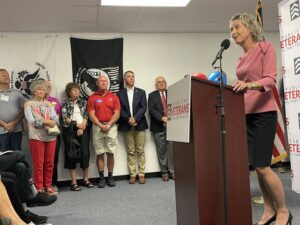 If you are thinking the new Jones & Cabacoy Veterans Care Center, built and operated by the Virginia Department of Veterans Services, will provide nursing home care to veterans, you would be mistaken. Or, perhaps you were thinking of the Virginia Beach Vet Center, operated by the U.S. Department of Veterans Affairs, to offer counseling for needs such as depression, post traumatic stress disorder (PTSD), and the psychological effects of military sexual trauma (MST). Again, you would be mistaken.

No, this is the RNC Veterans Community Center, operated by the Republican National Committee. Savannah Viar, the committee’s regional communications director, told The Virginian Pilot that the purpose of the center is to train veterans who want to campaign for Republican candidates. “It basically teaches them the best practices for door knocking, phone banking, poll watching and poll working,” she said. “They come in and go through that training class and then they can use what they learn to go out and participate in GOTV (get out the vote) efforts.”

Viar was unsure of what other services the facility might offer. “In other community centers that we’ve had, we had resumé workshops or canned food drives,” she said. “It’s rarely just (get out the vote) efforts.”  She said that any such other services would be open to all veterans, regardless of political affiliation.

Rich Anderson, chair of the Virginia Republican Party, was not so anxious for veterans of any political affiliation to come in. “We will reach out to those who have worn the cloth of the country and who share our conservative values and love of country,” he declared.

Sen. Jen Kiggans of Virginia Beach, who is the Republican nominee for Congress for that district, also was not so welcoming of veterans of other political affiliation. The center “will serve as a place for veterans and military families to join together as a community, learn more about our incredible Republican candidates, and work to elect candidates to public office who share our values,” she said in a statement to The Virginian Pilot.

In response to criticism that the Republicans were politicizing veterans, Viar said, ““We invite the Democrats to reach out to veterans in a similar fashion.”

This entry was posted in Politics and tagged Dick Hall-Sizemore. Bookmark the permalink.