This academic year the University of Virginia mandated that all students get vaccinated. With few exceptions, all have done so, as have most of the university’s 30,000 faculty, staff and employees. According to the Daily Progress, only 173 are estimated to be out of compliance. They have until January 4 to get their shots. So, how is the University of Virginia’s COVID-fighting regime working out? Have the mandates made a difference?

One way to tell is by comparing the incidence of new COVID cases reported during this fall’s mini-surge with the mini-surge that occurred a year ago, when pre-vaccination measures such as remote learning, quarantining and mandated mask wearing were in place. As can be seen in the graph above, this year’s mini-surge was smaller than last year’s. Last year’s fall surge peaked at 29.6 new cases per day (seven-day running average) compared to 23,3 new cases per day. That clearly looks like an improvement. (Both were dwarfed by the February super-surge, which peaked at 112.6 new cases per day, but I’m trying to compare periods with like conditions.)

In that limited sense, the UVa experiment can be viewed as a success. But these statistics don’t tell the whole story, nor do they answer a question not susceptible to measurement: was the marginal gain worth the trammeling of individual liberties?

One obvious question arises: How does the incidence of COVID in the University of Virginia community compare to that of the commonwealth as a whole? This graph shows the number of cases for the entire state. 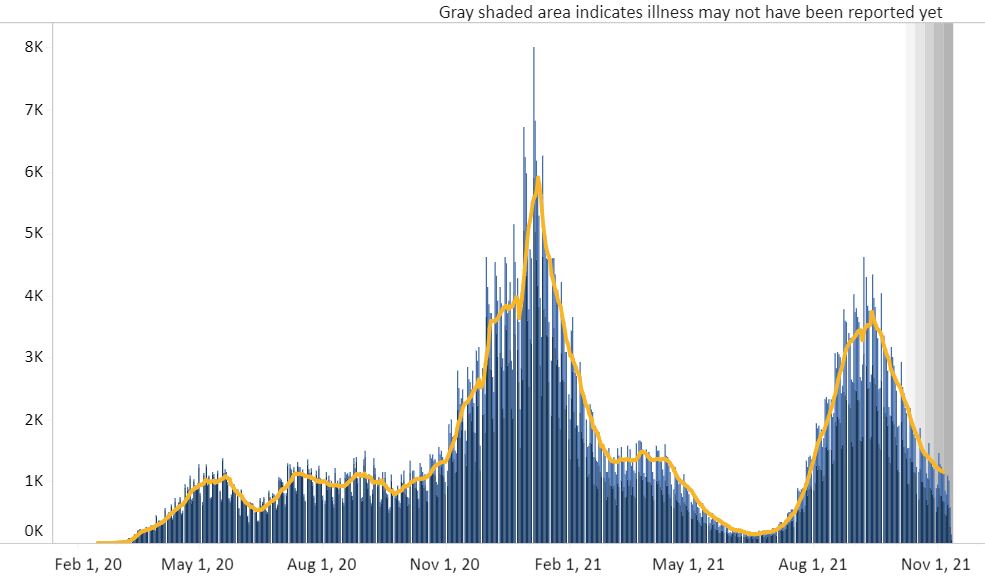 The increase in UVa cases during the late summer/early fall was much muted compared to the statewide run-up in Delta-variant cases. Relatively speaking, the UVa community was a COVID-free zone. By that measure, the mandates were a triumph.

But, then, the number of confirmed cases is only one relevant measure of the epidemic. The number of hospitalizations is an arguably more relevant measure. The only reason we care about COVID is that a meaningful percentage of people who get the virus wind up in the hospital, and a meaningful percentage of them die. If that weren’t the case, we would care no more about COVID than we do about the flu.

The UVa COVID tracker provides data for new hospitalizations. The problem is that it doesn’t tell us how many members of the UVa community were hospitalized — it includes all COVID-19 patients, including those from Charlottesville and the surrounding area treated by the UVa health system. The data (as seen in the graph below) shows that the Delta-variant surge caused almost as many hospitalizations as the January/February spike. One can surmise that most of those hospitalizations were of people outside of the highly vaccinated UVa community, although we don’t know that for certain. It is inexplicable that UVa’s COVID tracker does not track hospitalizations for students and employees as opposed to the population at large. 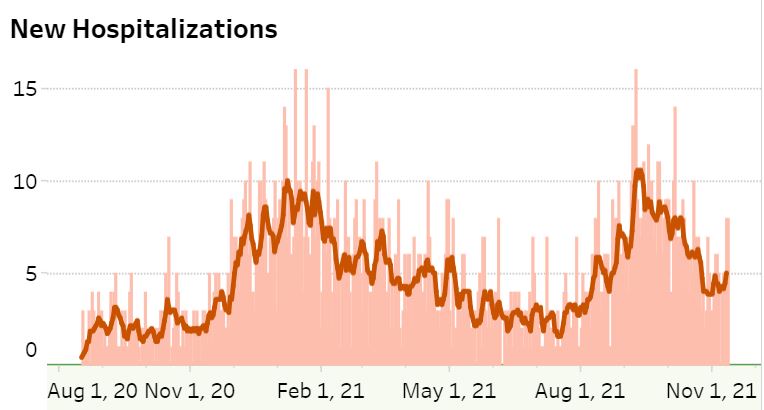 However, there are other ways to delve into the data for hospitalizations and deaths…

The Virginia Department of Health database provides the following breakdown of hospitalizations and deaths by age group for the Blue Ridge Health District, which roughly coincides with the UVa health system service area.

The bottom line: We can safely say that the UVa vaccination mandates did reduce the number of reported COVID-19 confirmed cases. We don’t have the data for hospitalizations in the UVa community of students, faculty, staff, and employees because UVa does not provide it. But we know that the number of hospitalizations in the student age brackets was small for the Blue Ridge health district overall, so we can infer that UVa students were never at much risk for hospitalization to begin with. Finally, we can suggest that the number of student deaths prevented by UVa’s vaccination mandates was zero. We can draw no firm conclusions about deaths of faculty, staff and employees who belong to older age brackets. A small number of hospitalizations and deaths might have been prevented in this group — we just can’t say.

Were the vax mandates justified? Philosophically speaking, striking the right balance between protecting individual liberties versus protecting the public health cannot be resolved by referring to the data. From a utilitarian viewpoint, however, data can shed light on the practical question of whether the mandates made any difference. At least in theory.

Unfortunately, we lack critical data that might allow us to answer the utilitarian question. UVa’s COVID tracker has a second big gap: we don’t know how many students and employees had previously been infected by COVID-19. It is still a matter of scientific argument how powerful and how long-lasting naturally acquired immunities are, but there seems to be no doubt that they confer some protection.

I have argued, as have others, that UVa should have granted a vaccination exemption to those who had acquired natural immunities (and could prove so with antibody tests). The relevant comparison, then, is how many hospitalizations and deaths occurred under the universal-vaccination regime compared to how many there would have been had previously infected COVID-19 patients been exempted.

We don’t know, and we never will. It’s a shame that, with all the capabilities they possess, UVa’s COVID khans did not collect the data that would allow us to answer those questions.