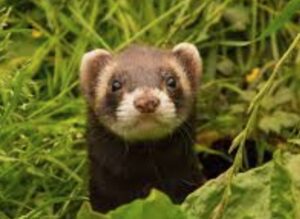 No, despite the uncanny similarity, that is not a senior VDOE official. That’s a weasel, commonly found along the James River.

Yes, Virginia, it looks like the Virginia Mathematics Pathway Initiative (VMPI) does seek to do away with “tracked” courses in which quicker and slower learners attend separate classes geared to their abilities. Gifted students would be given “extension topics” that would allow them to explore concepts that would not otherwise be covered in the one-size-fits-all math curriculum.

While insisting that VMPI still will allow “accelerated courses,” which have a different meaning from “tracked classes,” James Lane and the Virginia Department of Education (VDOE) officials have studiously avoided telling the public how the initiative would do away with tracked courses. Reporters who regurgitated Lane’s rhetoric during a press conference earlier this week were too dim-witted to ask him what he meant by “accelerated.”

Now comes a document of “School Board Talking Points,” dated April 26, under the masthead of Fairfax County Public Schools. I am told that it was distributed to every math department in the school system. Here is the smoking gun:

The proposed design provides students a path to explore mathematics in a way that meets their needs without having to take a different course than their grade-level peers.

The resources provided by VDOE would include specific extension topics to allow students opportunities to delve deeper into the concepts that they are learning or to extending their learning into concepts that would not typically be covered in the mathematics curriculum.

According to the Talking Points memo, “VMPI is a proposal to update Virginia’s mathematics curriculum in grades K-12 to address the persistent achievement gaps that exist in math learning outcomes.” It goes on to cite the 24-point achievement gap between Asian students and Black students in Standards of Learning pass rates, with Whites, Hispanics and economically disadvantaged students at various points in between.

As a result of this gap, “students of color are disproportionately represented in Virginia community college remedial mathematics courses,” the memo says. It goes on to note that research studies have shown that replacing traditional mathematics sequences — Algebra I, Geometry, Algebra II — with an integrated approach “can improve outcomes for students.” The memo cites anti-tracking research documents referenced on the VDOE’s new Math Pathways web page. That page, edited after Northern Virginia parents erupted in protest, now disavows the research. Yet, strangely, despite the disavowal, VDOE did not remove the links.

Bacon’s bottom line: The Northam administration has not been honest with Virginians about the “tracked” classes. I won’t say Lane lied because he never specifically stated that “tracked” classes would no longer be allowed. And when I repeatedly queried VDOE spokesman Charles Pyle, he simply declined to answer my direct questions. However, it can be said that Lane deceived the public in his press conference by stating emphatically, “We are not eliminating accelerated courses. We are not reducing the rigor of our courses. … We’re not eliminating any pathways to calculus,” while never mentioning what, oh, yeah, VMPI would dump tracked classes and VDOE would provide the resources for the “extension topics.”

Once again, the mainstream media failed in its job. All too happy to put to rest a narrative promoted by Fox News and Republican politicians, reporters failed to probe Lane’s weasel wording. Maybe it’s time for Fox News and the Republican candidates for governor to renew the outcry.

Update: Looks like The Virginia Mercury bit Lane’s story hook, line and sinker in this weekend re-cap of the controversy. What a shame. I expected better.

This entry was posted in Education (K-12), Media and tagged James A. Bacon. Bookmark the permalink.