Governor Glenn Youngkin wants to make a lasting difference in Virginia. He wants to leave it better than he found it.

In the years I have been writing about healthcare and education in Virginia, there is a recurring theme in both fields: not enough practitioners; specifically, registered nurses and teachers.

I will not in this article try to dissect the specifics of each shortfall, other than to say each is growing and reaching crisis proportions simultaneously in both professions.

This is, rather, a plea to the Youngkin administration and the General Assembly to turn their focus to dealing with those shortfalls. If they do not, a lot of the things  they are doing will be lost in the carnage of the failures of the healthcare and education systems.

Without education, there is no economic future. Without competent healthcare, there will be no future at all for many.

In both cases, the approaches must raise incentives and reduce disincentives.

Same with encouraging practitioners to remain in the professions. Rewards of a profession include money, life-work balance, enjoyment, control of one’s time and working environment, pride and prestige.

Strategic planning for a Virginia approach to mitigating the shortages in each profession must take all of those factors into account.

It is not nearly all about money.

Virginia is not producing enough new nurses or teachers. Fix that.

I offer a couple of specific observations about mitigating disincentives. 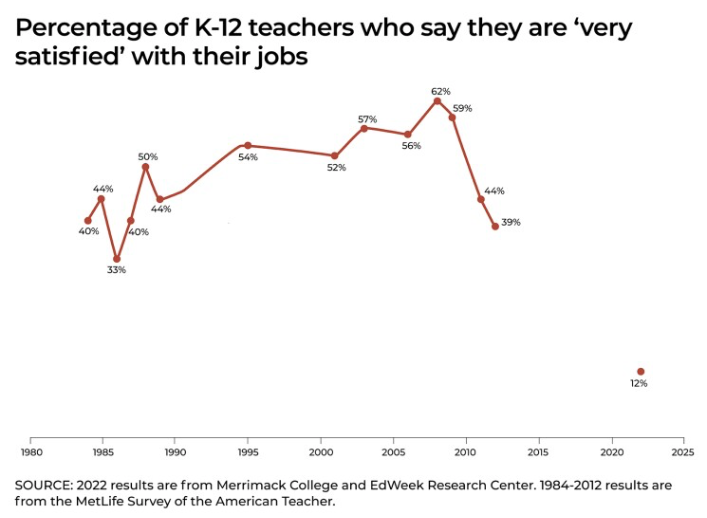 But a major disincentive driving teachers from classrooms in Virginia could not be more clear — chaos in the classroom.

I have written multiple times about teacher vacancies reported to the state being substantially lower than the real-time teacher recruitment data taken from certain school division websites on the same as-of date as the staffing and vacancy report to the state.

So, I submit that VDOE has no idea what the true teacher shortfalls are.

What we do know is that there are 91,737 FTE teaching positions in Virginia public schools in 2021-22. We also know that teacher satisfaction with their jobs is at an all-time low.

It’s not an easy time to be a teacher. In fact, teachers’ job satisfaction levels are at an all-time low, they’re working long hours for what they consider to be inadequate pay, and nearly half of the workforce is considering quitting.

Those are some of the stark new findings from the Merrimack College Teacher Survey, a nationally representative poll of more than 1,300 teachers that was conducted by the EdWeek Research Center and commissioned by the Winston School of Education and Social Policy at Merrimack College. The survey, which was conducted between Jan. 9 and Feb. 23, was designed to replace the MetLife Survey of the American Teacher, which ran for more than 25 years and ended in 2012.

The results paint a picture of a disillusioned, exhausted workforce. Teachers say they’re under pressure with little support and increasingly high expectations. Students have greater academic and social-emotional needs than ever before, and teachers are drained from two-plus years of pandemic teaching. Also, teachers are at the center of divisive political and cultural debates.

Workload. The typical teacher works 54 hours a week, but would rather spend more of their week teaching.

Attendance. Teachers don’t feel like they have much control or influence over certain aspects of their jobs.

Only 5% strongly agreed they have control and influence over their schools’ policies and 11% that they had control over their schedules (such as classes and non academic duties).

Only 34% of the teachers surveyed strongly agreed with the statement. “I have control and influence over my students’ classroom behavior.”

But let’s get more specific than that. I recently wrote an article about three elementary schools in Virginia Beach.

All three schools are in the same zip code. Two retained virtually all their teachers. The third lost over 20% of its teaching staff at the end of this year.

Often that can reflect bad leadership.

But in this case it seems to rather unambiguously be reflected in what the state calls “Learning Climate.” The school in question had a chronic absenteeism rate in 2020-21 in excess of 35%, defined as kids who missed 10% of classes or more.

That, my friends, is chaos.

No teacher can teach a class of children under those circumstances. No child can learn as well as he should, even with perfect attendance. The teacher is torn between pressing ahead regardless of attendance and trying her best to bring as many of her students along as possible.

Then there are the in-school behavior issues engendered by the kids who are far behind in their studies and unable to follow the lessons.

It snowballs. So, fix attendance whatever it takes.

In-school discipline. I again have written multiple columns about the abject failure of new systems of discipline in schools.

If you convened a panel tasked to design a system to destroy public schools in Virginia’s poorest urban areas, that panel would come up with restorative justice and multiple levels of discipline renamed “support.” It would also blame school resource officers for doing their jobs to protect the teachers and the law-abiding kids.

Across the country, they are employed as follows:

Adequate staff benefits the facility, the nurses, and the patients.

I have written here extensively about shortages of RNs in Virginia hospitals, in nursing homes and in government. If you want to read about how nursing satisfaction impacts patient outcomes and mortality, see this.

On the government side, the Virginia Department of Health has a massive shortfall in RNs serving in positions as inspectors of healthcare facilities and home health agencies.

Nursing patients is a dangerous job, and the physical pace and mental stresses of the work can be brutal. When staff shortages occur, the pressures on the remaining nurses worsen and the dangers to patients increase. Shift lengths increase to cover shortages. Nurses working beyond 10 hours were found to be 2.5 times more likely than nurses working shorter hours to report job dissatisfaction and symptoms of burnout.

RNs both treat patients and supervise their care by less qualified medical personnel.

The shortage of registered nurses in some hospitals and nursing homes and the shortage of state inspectors to report those shortages can combine to be a self-fulfilling prophecy of patient and nurse danger and nurse resignations. A bad working environment induces medical errors.

In that case, it really is a death spiral.

The state, unable to see the shortages, cannot intervene to at least reduce the risk by reducing or shutting down certain services.

In short, the Commonwealth cannot ensure safe healthcare facilities if it has no visibility into staff shortages. It does not. Fix that.

And then act to reduce or eliminate allowable capacities for services when staffing shortages necessitate it. That is what triage is for. Get regional health departments engaged in planning to supplement patient treatment in regional facilities with the capacity to help. The state may have to invest in medical transport in certain areas of the state.

Bottom line. The Virginia government, its nursing schools, schools of education and teaching and nursing professional organizations need to work to create plans to improve both production and retention of registered nurses and teachers.

I said I was not going to go into details and then did so anyway in a couple of instances of eliminating disincentives. I went there because it has been my experience over the years that when governments discuss personnel shortages, they try to solve them with money alone.

In the case of retaining nurses and teachers, money will help.

There is not only more to be done, but eliminating disincentives may prove more important.