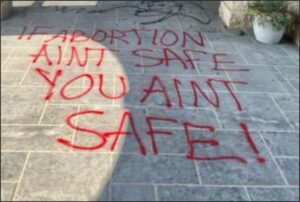 Should Governor Glenn Youngkin succeed in getting the Virginia General Assembly to curb abortion in Virginia from 25 weeks of pregnancy (at present) to 15, some 97% of abortions will still be protected, according to 2019 stats from the  Center for Disease Control and Prevention.

In addition, in six of the eight states which had pre-Roe v. Wade abortion bans, which have now become law again, an overwhelming majority of abortions will continue because abortion drugs (like Mifeprex – generic, mifepristone) –- cannot be outlawed. The only state with a trigger law where only 39% of abortions would continue is Missouri, based on data from the CDC.

In two states, Ohio and Texas, which have enacted restrictions after six weeks of pregnancy, CDC data indicates abortion through Mifeprex could conceivably cover 62% and 80% of abortions in those states, respectively.

About 54% of all abortions in 2019 were by abortion drugs, not surgery. Not all 1st trimester abortions can be done via drug, but the numbers are increasing and I will explain shortly why the states can do little about it.

I covered the drug and device industry for the trade press for 35 years, so I have some expertise here. Since the Supreme Court overturn of Roe was leaked in early May, I have written several articles, including a letter in The Washington Post,  about how this decision is really a wash for both sides – but these facts have not entered the news cycle or TV punditry. You can read one of these articles here.

Here are my arguments:

Virginia: Youngkin issued a news release the very day the Supreme court decided to overturn Roe on a 6 to 3 vote, asking two GOP senators and two delegates “to join us in an effort to bring together legislators and advocates from across the Commonwealth on this issue to find areas where we can agree and chart the most successful path forward. I’ve asked them to do the important work needed and be prepared to introduce legislation when the General Assembly returns in January.”

According to the Virginia Mercury, Youngkin supports abortion exceptions in cases involving rape or incest or where the mother’s life is at risk.

While Republicans are in the minority in the State Senate, 21-19, the Richmond Times-Dispatch reported that Sen. Joe Morrissey, D-Richmond, a Catholic who opposes abortion, could be a pivotal vote in passing what Youngkin and Republicans want, and then Lt. Gov. Winsome Sears can break a tie

According to CDC, there were 391 abortions in Virginia in 2019 beyond the 15th week, out of 15,582. To my knowledge, there is no data on whether these were conducted due to the three exceptions Youngkin outlined, but the reality is that restrictions after 15 weeks in Virginia will impact very few women.

(Important note: I am using CDC data, vs. data from the nonprofit Alan Guttmacher Institute, which has higher numbers for abortions, because they do not have the breakdowns CDC has. )

Trigger states: Much has been reported about 13 states having “trigger laws,” essentially laws that banned or curtailed abortion pre-Roe that remained on the books, and which are now law in those states since Roe was overturned.

But according to The Guardian, there are only eight states with “bans,” and it’s unclear what exceptions each state has, if any.

But I matched CDCs data on abortion based on pregnancy week to devise these statistics, which show abortions that could still continue via drugs (approved for up to 10 weeks of pregnancy): 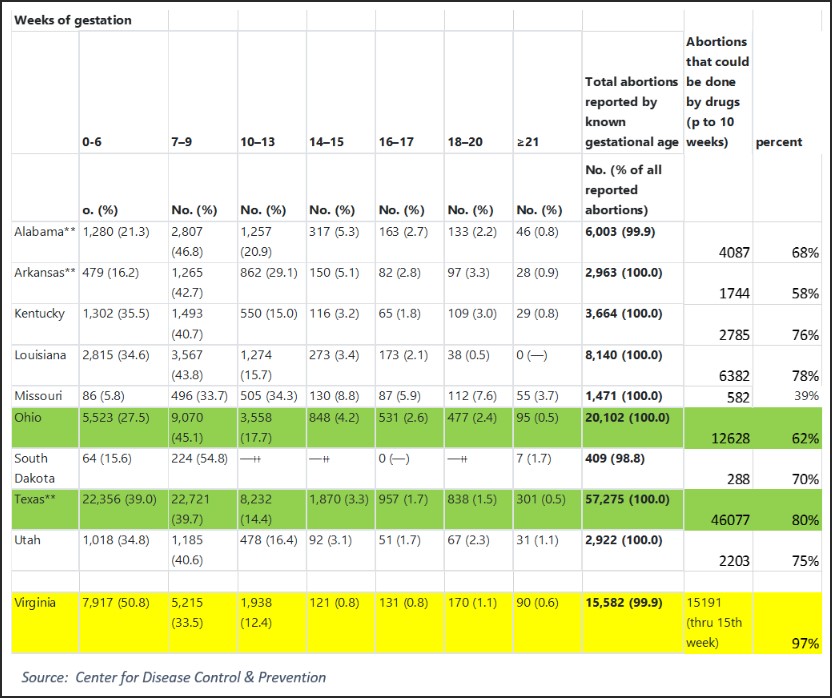 Update: CDC did not provide data for Wisconsin, one of the eight “trigger” states, which reported 6,467 abortions in 2019.

Only in Missouri would a majority of abortions be restricted beyond 10 weeks, which is the limit to which Mifeprex can be used.

I included Ohio and Texas because according to Guttmacher and The Guardian, they have bans at 6 weeks. But the CDC data shows that if drugs were used in those first 10 weeks, some 62% of abortions in Ohio and 80% in Texas would continue.

Why can’t states restrict abortifacient drugs? – Mifeprex, first approved in 2000, is indicated for abortions up to 10 weeks of pregnancy. On Dec. 16, 2021, the FDA removed the in-person dispensing requirement for mifepristone and expanded the distribution to certified pharmacies in addition to certified clinicians. This change allows for distribution of medication abortion by mail in states that do not restrict telehealth for medication abortion. Despite the change to the in-person requirement, prescribers are still required to be certified by the manufacturers

There is little the states can do to restrict it beyond what FDA allows because the agency has pre-empted state rules, and states cannot restrict drugs and devices sold in interstate commerce under the Constitution (dormant commerce clause, as it is called).

Noah Feldman, a liberal pro-abortion rights professor at Harvard Law School, agrees in this opinion piece in Bloomberg and The Washington Post in early April: “The constitutional justification for this federal authority is that drugs affect interstate commerce…. Congress and the FDA have occupied the field of drug regulation, thus preempting states from legislating in a way that bars a drug approved by the federal government.”

U.S Attorney General Merrick Garland said: “States may not ban Mifepristone based on disagreement with the FDA’s expert judgment about its safety and efficacy.”

And I would expect Big Pharma to send some very good attorneys into court to back DOJ efforts to defend FDA pre-emption. One abortion drug maker already is suing Mississippi for prohibiting remote prescriptions.

Women cannot be restricted from going to another state for abortion. In the rest of his statement, Garland said something the liberal spin machine refuses to acknowledge in the rest of his statement: “Today’s decision does not eliminate the ability of states to keep abortion legal within their borders. And the Constitution continues to restrict states’ authority to ban reproductive services provided outside their borders.

“… Under bedrock constitutional principles, women who reside in states that have banned access to comprehensive reproductive care must remain free to seek that care in states where it is legal. Moreover, under fundamental First Amendment principles, individuals must remain free to inform and counsel each other about the reproductive care that is available in other states.”

Justice Kavanaugh said the same in his opinion on the case.

When Roe was decided, ultrasound was in its infancy, there were no home pregnancy tests, no abortion drugs, and women (especially the poor) could literally go into the 2nd trimester gaining weight without knowing they were pregnant. Bans in most states were severe, meaning women had to travel to liberal states. Travel was expensive (especially by air) and about 18% of the U.S. population did not own cars in 1970. But today, about 91.5% of the U.S. population has access to a car. Pro-abortion groups are already contemplating providing travel to women in need if they have to go out of state for an abortion.

Ectopic pregnancy treatments will continue. Ectopic pregnancies amount to about 1-2 percent per year (about 100,000) and 97% are in the fallopian tube according to the CDC, which means they can be treated without surgical intervention (primarily with the drug methotrexate). But surgical removal of an ectopic embryo is not abortion and will continue.

In sum, the June 24 overturn is not the travesty the Left is portraying, and it’s a symbolic victory for the pro-life movement because abortion will still continue. I am pro-life and wish that weren’t so, but the data points in that direction.

This entry was posted in Abortion, Civil Rights, Courts and law and tagged Ken Reid. Bookmark the permalink.