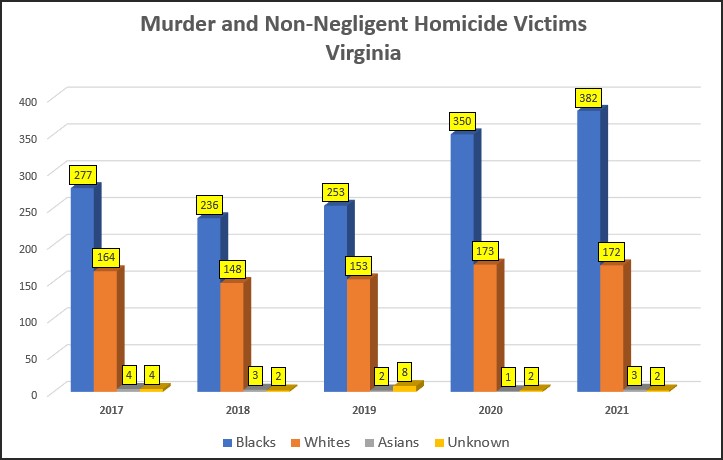 The Virginia State Police has published its 2021 Crime in Virginia report, and the big news — that homicides and violent crime continued their two-year surge — seemed not to pique much interest in the mainstream media. To be sure, the television stations, where crime news is a staple, and the Virginia Mercury did give the report perfunctory notice, so give those outlets some credit. But the majors — The Washington Post, the Richmond Times-Dispatch, The Virginian-Pilot, and Virginia Public Media — ignored it altogether.

Here is the data released yesterday that Virginia’s organs of “social justice” propaganda have not deemed important enough for same-day coverage:

Virginia, like the nation, is in the grip of a violent crime wave, even as changes in laws and law-enforcement policy have cut the number of drug-related arrests by half over two years. Remarkably, despite the media’s obsession with finding racial disparities in all walks of life, no outlet — not one — has taken note of the disparities in the race of the assault and homicide victims.

If Virginia’s editors and newspapers were interested in real social justice, as opposed to jamming every news story into their leftist paradigm and ignoring the news that can’t be jammed, they would report that the surge in murders over the past two years has occurred overwhelmingly in African-American communities. The COVID-did-it excuse might make sense if homicides and violent crimes were up evenly across all regions and demographic groups. But they’re not. The violent crime wave is concentrated in a few localities.

While Blacks comprise about 20% of Virginia’s population, they accounted for 87% of the increase in homicide victims between 2019 and 2021.

We can see a similar, though less pronounced, pattern for victims of aggravated assault. 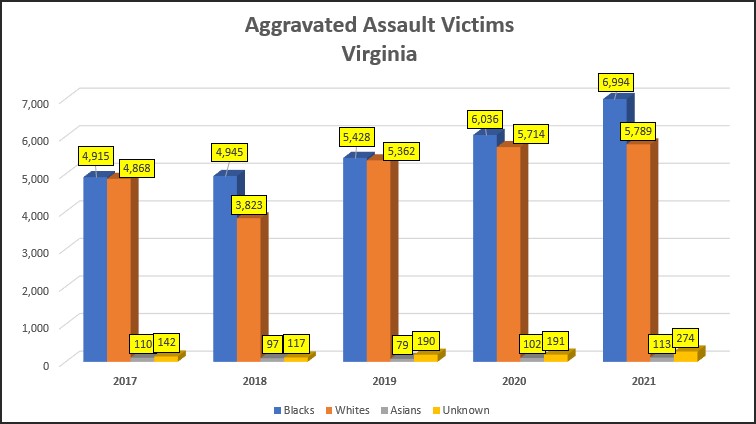 The other large category of violent crime, forcible sex offenses, showed little change for either Blacks or Whites over the same period.

The Virginia State Police does not track the racial identity of property-crime victims.

So, what’s the “social justice” angle here? The amplified rhetoric regarding “systemic racism” and policy changes designed to decrease racial disparities in incarceration have done nothing discernible to improve the lives of African-Americans in Virginia — other than those of the criminals, of course. Law-abiding African-Americans were less safe from violent crime in 2021 than in 2019.

Are “progressive” rhetoric and policy to blame for the surge in lawlessness, or have they simply not had time to exert a positive effect? The macro-level evidence strongly suggests that Virginia is on the wrong track. But the devil is in the details. Large aggregations of numbers can hide important complexities and cross-currents. We need to dig deeper into the data before drawing definitive conclusions.

This entry was posted in Crime , corrections and law enforcement, Media, Race and race relations and tagged James A. Bacon. Bookmark the permalink.