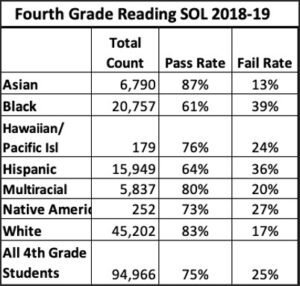 Many politicians, activists and media commentators persist in the conviction that Virginia’s schools are systemically racist. The main evidence to support such a proposition is the reality of disparities of educational outcomes between racial/ethnic groups, like those summarized in the chart at right. If Blacks and Hispanics pass their Standard of Learning exams at lower rates than Asians, Whites and others, that in itself is deemed to be proof that the system is biased against non-Whites.

However, that logic fails to take into account that racial/ethnic groups vary by at least three factors known to affect educational outcomes: socioeconomic status, English as the primary language, and chronic absenteeism.

The table tells an incomplete story. True, the average pass rate for 4th-grade English SOLs is 14% and 11% lower for Blacks and Hispanics, respectively. But Asians pass at a 12% higher rate than the statewide average — more than Whites. Also, multiracial students, who also are classified as “people of color” supposedly subject to discrimination, pass  at a 5% higher rate than the overall average. Clearly, there are other factors than skin color at play.

It’s understandable that children whose first language is not English, who are still learning to cope with the irregularities of the English language, would not do as well as English-speaking students on the reading test.

Among students who do speak English but were disadvantaged (seen in the table below), Asian children scored an 86 pass rate, Hispanic 76, and White 73. Multiracial (two or more races other than Hispanic) students scored 68, Hawaiian/Pacific Islander 65, Native American 64, and Black children 55.

For English-speaking children who were not disadvantaged, 73% of Black students passed, while the scores of the other six groups, including five minorities, ranged from 83% to 96% percentage points. Economic disadvantage affects all racial/ethnic groups, and there is evidence that points to chronic absenteeism as a major factor in SOL performance.

James C. Sherlock and others have written about absenteeism in our public schools in Bacon’s Rebellion over the years. On December 8, 2020, in “Chronic Absenteeism and SOL Failures in Virginia Schools,” Sherlock wrote that in the Virginia Department of Education’s 2020 Annual Report on the Condition and Needs of Public Schools in Virginia, “The word absenteeism appeared nowhere in that report in which structural racism, teacher quality and money were featured as causes of minority academic failures.” He included a table showing the relationship between low SOL scores and absenteeism.

Likewise, absenteeism was not discussed in the “2021 Annual Report of the Needs and Conditions of Public Schools” in connection to SOL results. Truancy was mentioned only peripherally in a listing of positions that qualify as “support services positions” such as in” support positions related to truancy and dropout prevention.”

Yet absenteeism is so important that it is included as a factor in school accreditation. In his post, Sherlock says, “The data show that fewer than a third of Virginia’s schools have chronic absentee problems, and the VDOE knows which ones those are.”

Are there additional factors beyond race, economic disadvantage, language and chronic absenteeism preventing Black children from reaching their potential? Are the social justice warriors in the educational system interested in finding out, or do they have their story, and they’re sticking to it?

This entry was posted in Education (K-12), Race and race relations and tagged Carol J. Bova. Bookmark the permalink.