News Flash: Teaching Is Not a Work-from-Home Job 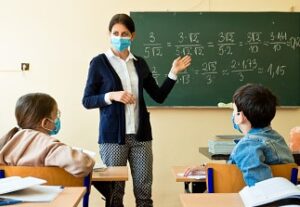 Some Chesapeake teachers – you know, people who went to college to learn how to teach kids — are balking at orders that they return to the classroom in early November.

While it was initially expected that the first semester would be entirely virtual, a sharp downward trend in COVID-19 infections means that schools are reopening faster than expected. As high school kids return, more teachers are needed.

This does not include teachers with medical exemptions, by the way. They can continue to work from home.

Chesapeake was the first local school district to bring students back to the environment where they learn best: The classroom.

Study after study shows children falling dramatically behind in academics due to virtual learning. In a June article headlined “The Results Are In For Remote Learning. It Didn’t Work,”  The Wall Street Journal documented just how far behind students fell during their four-month rumspringa. It’s alarming.

A story in Sunday’s New York Times, “Private Schools Hold New Attraction For Rich Parents,” showed that admissions at pricey boarding and private schools are booming as wealthy parents remove their kids from online classes and put them in private schools. Until public schools reopen, middle and working class children will be left behind.

According to The Virginian-Pilot, some of these disgruntled Chesapeake teachers apparently believed that they were going to teach from the comfort of their homes for many more months.

“This may sound dramatic, but I feel like I’m going through the stages of grief,” one of the teachers whined.

Because she’s going to be back in class with students? This teacher insisted on remaining anonymous, of course.

The Pilot quoted another unnamed educator who moaned that she’d planned to teach from home for many months and had bought a TV to use as a computer monitor and upgraded her internet.

“I felt like all of the efforts I’ve been putting in to make this work were not valued,” she complained.

You’ve got to be kidding me.

Kids are supposed to sit in their bedrooms and stare at computer screens all day because some teacher upgraded her home internet and bought a TV monitor?

Look, study after study, including a new one from Yale, show that young children are rarely vectors for the virus. Even teenagers are at little risk from Covid-19. And youngsters don’t seem to spread the virus to teachers either.

We’re often scolded by Team COVID that the U.S. has done a terrible job of handling the virus and we should look to Europe to learn how to behave in a pandemic. Well, Europe is experiencing major outbreaks, yet schools remain open. In a story headlined, “Europe Stays Committed To In-Person Classes As School Outbreaks Remain Rare,” The Washington Post reported that most countries on the continent have open schools and surprisingly few problems.

In fact, many European countries have dropped mask requirements for students because they’re seen as a distraction.

If we’re truly a nation that values education and understands risks and rewards, our goal should be to get the kids back into class as soon as possible, as our European counterparts have done.

That means teachers have to be there too.

Frankly, if a teacher decides she wants a work-from-home job, she should apply for one. Teaching, like many other professions, requires workers to leave home.

They simply need to develop the bravery of Harris Teeter baggers.

46 responses to “News Flash: Teaching Is Not a Work-from-Home Job”