Envision This: a Lawn with No Signage 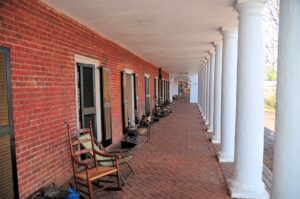 In a letter written to Aubrey Daniel, one of the strongest critics of the UVa administration, Rector James B. Murray Jr. brings out new facts and arguments regarding Jim Ryan’s handling of the “F— UVA” Lawn sign controversy.

Criticism has focused on a student’s use of profanity in a sign on the door of her Lawn residence. Although the university has rules against the indiscriminate display of signage, it has not enforced them in recent years. Therefore, Ryan has decided, singling out the student to remove her offensive sign at this time would violate her right to free speech. Recent photos focusing on a handful of offensive signs, Murray writes, “do not tell the full story.” He elaborates:

Over the course of the past several decades we have allowed signs to proliferate on Lawn room doors. The signs you have seen in photos are a small fraction of the signs that are posted today and have been posted on most doors each school year for a long time. We have allowed our own rules to be stretched beyond sense, increment by increment, relying upon little more than the good judgment of our accomplished Lawn residents regarding content. Until this past week one would be hard pressed to find but a few doors that did not have multiple signs – some political, some encouraging virus protective measures, some messages to friends, some cheering the football team, and much more. Lots of signs, the entire length of the Lawn. We have a contract with each resident. It includes a code of conduct. In my view, we have been too lax in interpreting that contract regarding signs. In doing so we have established a regrettable norm that now must be revised. …

You wrote: “All the doors on the Lawn are meant to be harmonious in appearance. All were meant to look the same.” Unfortunately, they do all the look the same; at present they are harmoniously ugly, littered
with signs. Constitutionally, we cannot today choose one ugly door for special treatment, saying that it alone “defaces” the Lawn.

Personally, this argument strikes me as an excuse for inaction. All signs must come down, in accordance with Lawn residents’ contracts with the University. As described by Jim Sherlock in a post yesterday, the relevant section of the contract reads as follows (my emphasis):

This is not a question of asking one or two students to take down signs. All signs must come down, save for “a 1.5ft x 2ft pin board for displaying paper materials,” as specified in the contract.

Remarkably, as Murray acknowledges in a footnote in his letter, some students have begun acting in accordance with the contract. “In the past week, a number of Lawn residents who reject the offensive messages have launched a silent counter-protest. They have stripped their doors clean of signs, leaving them as pristine as some have been for many years.”

Unfortunately, the administration has boxed itself in. It would be humiliating at this point for Ryan to invoke the language of the residence contract. But Murray is Rector, effectively chairman of the board of visitors, so he is a step removed and in a position to be more intellectually honest. I await his response to Sherlock’s critique.

42 responses to “Envision This: a Lawn with No Signage”