Keep California on the West Coast 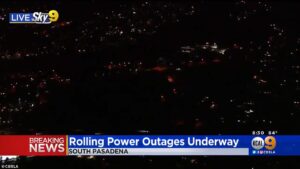 Virginia has passed a law — SB 851 — requiring Dominion Energy to supply 30% percent of its power from renewable energy sources by 2030 and to close all carbon-emitting power plants by 2045. According to the Energy Information Administration, natural gas fueled 53% of Virginia’s electricity net generation in 2018, nuclear power provided almost 31%, coal fueled about 10% and renewable resources, primarily biomass, supplied nearly 7%. Over the next decade, Virginia must replace its coal fired power and reduce its gas-generated electricity by over 40%. From its public statements, Dominion plans to go all out in wind and solar, emulating California.

California’s electricity rates are 61% higher than Virginia’s — 19.79 cents per Kwh versus 12.28 cents. Over the past month, there have been numerous news stories about rolling blackouts in California caused by renewable energy mandates and inability to substitute enough from other sources when solar and wind aren’t able to meet demand.

After a 2000 energy crisis, which led to rolling blackouts and sky-high electricity prices, California has focused on eliminating fossil fuels and shifting to carbon-free energy sources. Renewable sources, primarily wind and solar, produce plenty of power during the day when there is sunlight and windy conditions but when the sun goes down and winds become calm, the electric grid has to pick up the load. if there is not sufficient storage or conventional power sources, blackouts are the answer. The problem is exacerbated because people’s peak electric use has shifted from mid-day to evening when solar resources are ending production. The solution is electricity storage batteries but those are currently not commercially viable. And, predictions of declining battery costs are like the horizon, they recede as you approach them.

The focus on renewables has had a serious unintended consequence. Large subsidies for renewable energy have made natural gas and nuclear plants uneconomical. As a consequence, these less expensive sources are being shut down and Californians are paying high prices for a renewable folly.

Virginia has chosen to follow a similar path and Dominion is willing to play along to maintain the good graces of the Legislature so it can remain a profitable monopoly. Dominion has laid out a path forward and customers not share owners will pay the price. In May, the utility submitted a 15-year plan for becoming carbon free by 2045. In the plan is an estimate of an additional $500- per-year cost for each customer in addition to the rates reflecting Dominion’s costs to provide electricity.

According to a May 2020 CFact article, “After all of the mandates of the VCEA (Virginia Clean Economy Act} are added up, Dominion customers will be saddled with $30 billion in additional expense over the fifteen year period covered by the Dominion plan –- $30 billion more than would be the case if the status quo were maintained.” Dominion recently announced an investment in hydrogen which it plans to blend natural gas to reduce emissions. Could this be a hedge against coming up short on wind and solar?

The zero-emissions goal is part of a larger plan by states and the Federal Government to reduce climate change emissions. What is conveniently ignored, beyond many climate uncertainties, is that if all of these emission reduction plans are successful, the effect on the climate system will be marginal. While wealthy nations like ours are adopting expensive, do-good plans, African and Asian nations are burning coal to raise their standards of living. China, for example, has plans that would require it to add a large coal-fired power plant every two weeks for the next 12 years. While those nations are focusing on economic growth and higher standards of living, Virginia and a number of other states are putting in place plans that will give us California electricity prices and its rolling blackouts. It would make more sense to help developing countries adopt our energy technologies for power generation.