Cats Win Round One Over Birds At Assembly 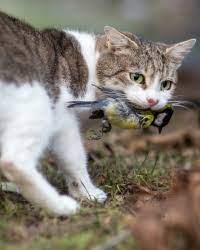 Organized efforts to trap and sterilize feral cats, and then return them to roaming free, operate in legal limbo in Virginia. It is against the law to abandon a companion animal that you have taken into care. The latest attempt to change that has divided animal advocates into snarling camps.

Senate Bill 1390 is offered by Eastern Shore Senator Lynwood Lewis, and Tuesday received the approval of the Senate Agriculture, Conservation and Natural Resources Committee, 11-4. It will be on the full Senate floor this week. Lewis said the purpose is to make it clear that the programs, usually run by volunteers but sometimes by professional shelter operations, are legal.

In subcommittee testimony Monday afternoon, the animal care community split right down the middle once again, basically along the same lines that form when the issue is euthanasia. An unsuccessful anti-euthanasia, or “no-kill,” bill was the fault line in last year’s earthquake, as reported on Bacon’s Rebellion. This year, it is feral cats again.

I was in the middle of that fight for a few sessions on behalf of People for the Ethical Treatment of Animals (PETA), which runs a Norfolk shelter operation that performs euthanasia, with feral cats the most common animals killed. PETA is not totally opposed to the so-called “Trap, Neuter and Return” (TNR) approach, but it wants to see any feral cat colonies getting continuing human care.

Further disclaimer: Such an “adopted” feral cat colony exists on the Newport News Shipbuilding property, a pet project of a friend among my co-workers there. Many farms host colonies of barn cats, with varying levels of human care. There is nothing in this bill that requires human care post-release.

The fiercest opposition to this is coming from advocates for birds. Cats kill nearly 2 billion wild birds just in the United States alone, per year. Legislators heard and disregarded concerns from the Audubon Society, the Virginia Society of Ornithology, the Wildlife Center of Virginia, and the American Bird Conservancy.

Edward Clark, president of the Wildlife Center of Virginia, said others would (and they did) discuss the carnage caused by cats. He complained that:

That is what the bill does. It first establishes a new definition of “community cat” so that these feral cats are pulled out of the definition of “companion animal,” and then exempts people who engage in TNR from the prohibition on abandoning an animal. It also exempts “community cats” from the five-day hold requirement, so if it is your family pet, sayonara.

This is not a “no-kill” bill, yet it is another aspect of the same debate. The death of so many birds and other small wildlife is not the only problem with these feral populations. The TNR operations when run well do sterilize and vaccinate the animals. Despite the claims of Senator Lewis, however, nothing in this bill requires any of that. Nothing.

There are grey areas in the current situation. One locality with an active program, apparently, is Fairfax County. Former Fairfax legislator David Albo, hired to lobby by Alley Cat Allies, was the first witness in favor and pointed to that county’s TNR program as a success. He carefully did not claim that the feral cat population is down, but he claimed that over ten years the number of feral cats being turned in to the local shelter was cut in half.

“There is no mystery why their number of feral cats has gone down,” responded Sharon Adams of the Virginia Alliance for Animal Shelters. She said the Fairfax County shelter has a published policy of refusing to accept them, right in its intake policy. Such policies are common around the state, and PETA’s willingness to take them in Hampton Roads is one reason its euthanasia numbers are high.

Paulette Dean of the Danville Area Humane Society said 661 of the almost 1,500 cats her shelter accepted last year came from other localities, where shelters refused them. The fear of being attacked for high euthanasia numbers is usually the reason. Any cats are hard to place, and feral cats cannot be released to adoptive families.

No local government spokesman testified on either side. They will be under huge pressure to set up local TNR programs if the law clearly allows them. The Office of the Attorney General was also silent. It now has an active animal rights legal effort, so Attorney General Herring needs to be heard on this, publicly.

At times in my life, I have been owned (and bullied) by cats that I foolishly fed and housed, and I like cats. But I would not have turned any of them loose on the world to kill even more small critters than they did, despite how they would sometimes share their prey with us. This is not a complicated issue at all:  Trap, neuter and return (it used to be “release”), even with sterilization and shots in between, is a public health disaster.