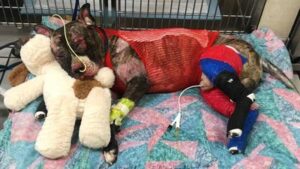 Richmond’s Tommie during the five-day effort to save him from horrible burns a year ago. The man who burned him said he tried to put the dog in a shelter but was refused.  Photo: The News and Advance.

Another attempt to impose the “no-kill” philosophy on Virginia’s animal shelters is pending in the Virginia Senate, sponsored by a rural Republican who is the great champion of that (so-far) failed cause. After a long subcommittee hearing Thursday, his bill was put back in the shelter pen to await its fate for another week.

If you think gun control is the most contentious issue facing legislators year in and year out, sit in sometime on a meeting of any subcommittee dealing with animal bills. Read the emails generated by the passionate advocates, which can be among the nastiest in inboxes. Legislators dread these issues.

For five years I was in the middle of the Animal Wars as the lobbyist for People for the Ethical Treatment of Animals. Its world headquarters is in Norfolk and as part of that it runs a regional animal care operation that includes a private shelter with a wide-open admission policy. That means PETA’s licensed shelter has a high euthanasia rate, making it a national and even international hate target for the no-kill movement.

State Sen. Bill Stanley, R-Franklin County, had a bill to basically prohibit euthanasia at private shelters in 2015, which got me hired by PETA. It took five years to work that through, ending with a new state regulation put in place last year requiring private shelters to have adoption as their purpose, and to take various steps toward that goal, but with no prohibition or numerical limitations on euthanasia.

Having failed in their goal to prohibit the practice or impose a quota that could be slowly reduced toward prohibition, Stanley and the no-kill advocates are back with Senate Bill 304. If a shelter puts down more than half the animals it takes in its care, his bill will take away its ability to obtain the fatal drugs used by its technicians. A veterinarian would have to do any future euthanasia procedures, a major impediment.

But Stanley told his fellow senators they really “need to work toward a 100 percent save rate, that we become a no-kill state.” His principal supporting witness, Debra Griggs of the Virginia Federation of Humane Societies, said “the goal of my organization is at least a 90% save rate.” The three-member subcommittee they were addressing includes two relatively new Senators, discovering the downside of low seniority.

The deep and abiding divisions the “no-kill” ideology creates among animal rights groups has another consequence: It destroys their chances of passing other bills they can agree on, such as restrictions on tethering dogs outside. This is another case where moderate bills are proposed, but the real goal is to prohibit tethering period.

Here’s the deep dark secret of the no-kill movement. The “no kill” shelters maintain their pristine statistics by (1) refusing to accept animals that are not easy to place (including most cats) and (2) letting sick or injured animals suffer and die by natural causes, since that won’t count as “euthanasia.” On the state report that animal counts as having “died in facility.” Far too often they also knowingly adopt out dangerous animals, who then injure their new humans or other animals in the home.

Was that an element in the story behind the now famous pit bull who was fatally burned by a Richmond man a year ago? Before his trial the accused told  Richmond’s WTVR-6 “he tried to give the dog away to various shelters, but no one would take it in because the dog was deemed too vicious.” He said he killed it after it bit his daughter, which was not the first incident.

There have been other cases where desperate owners were turned away from no-kill shelters and just killed the animals themselves. Of course, Tommie’s case makes another point, because the cruelty continued when he was allowed to suffer from his horrible burns for five days. He had zero chance of recovery and the pain should have been ended quickly. That situation epitomized the flawed ethics of the no-kill movement, which now wants to put the animal on a fundraising license plate. “Died in facility.”

The PETA operation will accept and euthanize such dangerous animals (and get attacked for it). It also accepts unadoptable feral cats, which drive up its euthanasia numbers. It offers compassionate euthanasia for families who cannot afford to pay a vet $300 to $500 for that service to a suffering or aged animal. That alone accounts for about one-third of the animals PETA puts down.

The lobbyist for the Virginia Veterinary Medical Association was there Thursday to oppose Stanley’s bill, again, complaining this time about an anonymous telephone call deriding it for “supporting PETA.” The director of a Danville area shelter, another regular target of Stanley’s derision, said its high euthanasia rate is directly tied to the surrounding no-kill facilities turning away hundreds of animals. A lobbyist for the state association of shelters said she was insulted by Stanley and Griggs’ implication that her members do not seek adoption as the best possible outcome when it is possible. They do.

And most local governments recognize that the burden will fall on them and their budgets if the private operations are forced to go “no-kill” or close. Then the activists will be banging on their doors and calling their local elected leaders with complaints about euthanasia. It was a story I did for the old Roanoke World-News more than forty years ago, about that city’s public shelter.

Stanley’s bill went by for another week with the subcommittee chairman asking him to try to find compromise. The effort will fail. The choice is a simple one, to impose a visionary and flawed philosophy that leads to animals being abandoned, set loose or suffering, or to allow each shelter board to set its own policies on which animals to take and which lawful outcomes are best. No other state has imposed the “no-kill” approach and Virginia should not either.

This entry was posted in General Assembly, Regulation and tagged Stephen D. Haner. Bookmark the permalink.