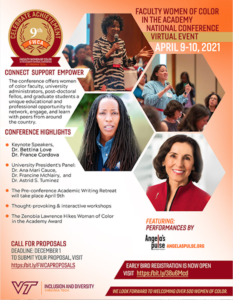 A bad penny keeps on turning up.

This appearance is however critically different in context from Ms. Love’s appearance at the University of Virginia School of Education.

The Tech online get together is for faculty, and I have no problem with that. It represents legitimate academic inquiry.

Presumably the audience will question Love on her recommendations for resegregation of the schools and a radically unique curriculum for black students. That should engender a lively debate that I will pay to see.

The UVa School of Education appearance was as a keynote speaker for K-12 teachers, which represents an endorsement.

17 responses to “Bettina Love at Virginia Tech – a Different Context”