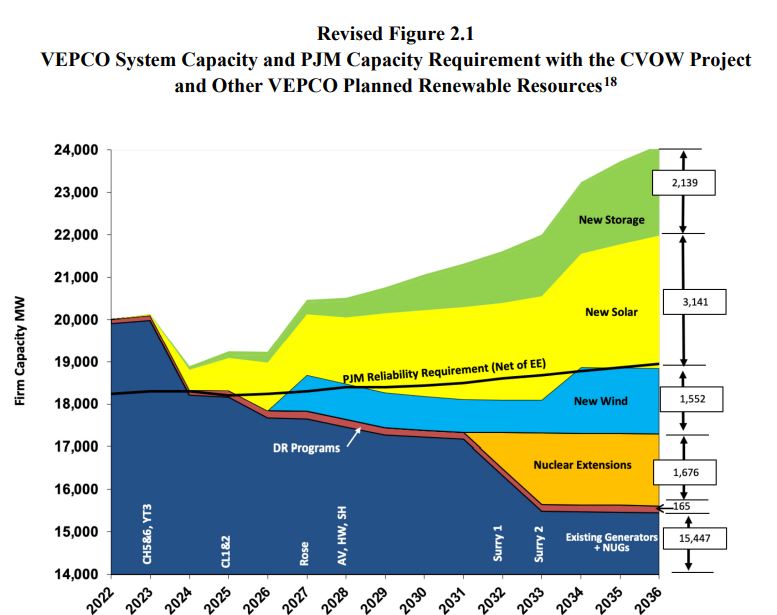 Exhibit submitted by Office of the Attorney General showing the excessive generation Dominion Energy will have compared to its expected demand, funded by ratepayers. The black line in the middle is the projected customer demand. Click for larger view.

There is no justification for Dominion’s $10 billion offshore wind project other than that the General Assembly has ordered it, a witness for Virginia’s Attorney General has testified. The utility doesn’t need its electricity, doesn’t need its renewable energy attributes, and is ignoring lower cost alternatives if it does need generation in the future. Further, its claims of economic benefit are based on faulty assumptions.

Virginia’s Attorney General Jason Miyares is the customers’ main representative at the table as the State Corporation Commission reviews this pending application. By law the AG office serves as Consumer Counsel in these matters.  Despite all the concerns raised in his expert’s review, Miyares is not recommending that the SCC reject the project.

In fact, as mentioned in an earlier Richmond Times-Dispatch review of the case testimony, no party so far has recommended that the SCC reject it. That was noted by a triumphant Dominion spokesman at the end of the newspaper’s story when it might properly have been the headline.

That is the headline at this stage of the case. The language inserted into the 2020 Virginia Clean Economy Act by Dominion and its environmentalist allies demands approval of the project without regard to proving necessity, reasonableness or prudence. The law orders the SCC to find the project prudent unless it misses a very high cost target or fails to have a plan to start operation by 2028. (Note, it doesn’t have to be in operation then, merely have a plan.)

The portion of the VCEA dealing with solar farms lacks the “shall be deemed prudent” language. In the most recent review of solar projects, both the Attorney General and various environmental groups filing under the umbrella of Appalachian Voices urged the SCC to deny some of the projects as too costly.

The Attorney General’s expert is left recommending that the SCC set a cost cap on the project, enhance project monitoring and somehow shift financial risk onto the company for delays or overruns. An outside expert hired by advocacy group Clean Virginia also recommended a cost cap in his previously reported testimony.

Yet to testify is the SCC’s own staff with its analysis of the project, which is likely to delve more into the financial cost to consumers. That is due April 8. A hearing on the application to build 176 giant wind turbine generators 27 miles off Virginia Beach will start May 16.

There was legislation proposed at the 2022 General Assembly that would have restored the SCC’s ability to say no to this, and Miyares endorsed it through testimony by Senior Assistant Attorney General Meade Browder. Browder heads the consumer section of the office. The bill failed in a Senate committee, not even receiving votes from all the Republicans on the panel.

So, here are many of the things wrong with this application, filed under oath by the utility, as identified by energy witness Scott Norwood of Austin, Texas.  Norwood has been a go-to analyst for Browder’s team in several cases. His complaints are listed in the order they appear.

There are other points where he criticized the data or assumptions used by the utility. In an honest review, with the SCC truly required to decide reasonableness and prudence, these issues (and others raised by other witnesses) could doom the project to outright rejection.

Which of course is why the utility wrote a law which left the SCC powerless and persuaded sufficient majorities of both legislative houses to adopt it.