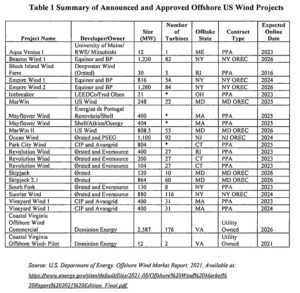 The table reproduced above may one of the most interesting exhibits submitted to the State Corporation Commission as it considers Dominion Energy Virginia’s offshore wind application. Two things jump out, both highlighted in pre-filed expert testimony sponsored by environmental activist group Clean Virginia.

First, only in Virginia is such a project being financed directly by the captive ratepayers of a monopoly electric utility. Only in Virginia will the turbines be owned by the utility rather than a private investor.

Second, Dominion’s proposal is the largest U.S. project by a big margin. In some other cases, proposals have two or three phases. But remember, Dominion’s current 2,600-megawatt plan is also supposed to be followed by a second tranche of similar size built adjacent to the first 178 turbines. Dominion’s first tranche is double the size of the largest European projects, two in the United Kingdom.

It is the recommendation of Clean Virginia’s expert that if there is a second wave, it should be financed by one of the other methods used by other states, with an independent developer finding their own financing based on contracts to sell the power and the renewable energy certificates produced. For offshore wind, the mechanism is an OREC, or offshore wind renewable energy certificate.

The motion for the SCC to try to impose that condition on Phase II, however, is well-advised but a long shot. Neither Dominion nor its allies in the Virginia General Assembly are likely to reconsider the approach which makes the most money, and produces the least risk, for the utility’s stockholders.

The expert, Maximillian Chang of New York’s Synapse Energy Economics, had other recommendations in his filing to be explored in a later post.

You see in the list above that other states use either power purchase agreements (PPAs) or offshore wind renewable energy certificates (ORECs). With a PPA the private developer has a long-term, usually fixed-price contract to sell the electricity directly to a utility “load serving entity” or to the regional wholesale market. Dominion has often done PPAs, for fossil generation and now for solar generation and storage. But it prefers utility-owned and claims the 2020 Virginia Clean Economy Act sets a 35% cap on outside providers.

With the OREC (and this is more complicated) what the state is buying is the environmental attributes, the carbon-free energy “benefit” for each megawatt hour of electricity produced. The power generated goes through the wholesale market.

The market and monetary value for the RECs is a crucial financial subsidy behind the growth of renewable energy around the world. Companies buy RECs and trumpet they are then net-zero despite their own fossil fuel use. In this case, states like New York and Maryland are signing long-term contracts to buy all the ORECs, revenue guarantees which allow the developer to secure private financing.

New York announced a big deal in January for 2,500 megawatts (about the same size as Dominion’s) from two developers who plan to have their turbines spinning by 2027, a year later than Dominion. It claims an average residential bill cost of less than $1 per month, and an all-in development cost of $80.40 per megawatt hour. How does that compare to what Dominion’s project will cost?  The level of secrecy in the pending application makes that hard to compare.

Actual cost and customer risk comparisons between known PPAs, OREC contracts and Dominion’s accounting would be a useful addition to the SCC case record, which is still being built and culminates in open hearings in May. You can find more discussion in a 2020 publication from the U.S. National Renewable Energy Laboratory. It compares PPAs and ORECs.

Both procurement instruments have been awarded competitively based on price offers and other criteria (e.g., economic development, ratepayer, and environmental impacts). They provide a high degree of hedging benefits against otherwise fluctuating prices for delivered services (i.e., the generator receives a fixed price for services delivered, regardless of the price that the generation sells for in the wholesale market). The resulting de-risked revenue profile creates a degree of financial certainty that is often needed for securing long-term project financing.

No section of the NREL report discusses the relative costs and benefits of “utility-owned,” where the ratepayers cover all capital, pay all interest and profit and where there is no capped price for the project and no guaranteed price for the power or the ORECs. Only one state, one utility, one General Assembly and Governor have gone down that road. 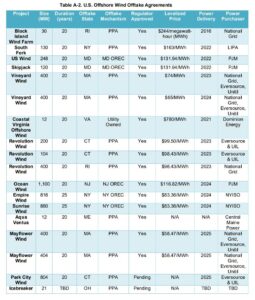 The NREL also developed a table, reprinted here, comparing the costs and financing structures of the known offshore wind projects at the time. For Virginia, that included the $295 million two-turbine demonstration project Dominion built, which did start producing power last year. It’s $780 per megawatt hour levelized cost of energy was much higher than the others. Dominion claims it can build the larger project for one-tenth that LCOE (but it won’t show us the numbers.)