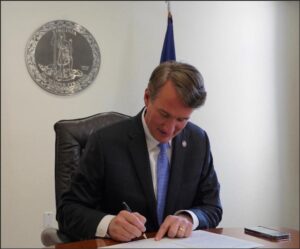 In recent years, “cancel culture” has targeted many individuals, businesses, and organizations with the intention of silencing them into submission. In one tactic, political activists target or hack donor lists of groups they disagree with and publicly shame or intimidate donors and/or their businesses who expected that their gifts would be kept private. For example, some donors to the Canadian truckers’ Freedom Convoy had their gifts made public, and the givers were subjected to public shaming, in some cases costing them their reputations and livelihoods.

To remedy this, the General Assembly passed HB 970 and Governor Glenn Youngkin signed it April 11.

The Alliance Defending Freedom (ADF) Senior Counsel Zack Pruitt had this to say about the signing Monday of HB 970, a bill that protects the private information of individuals who support charities and other nonprofit organizations of their choice:

Every American should be free to peacefully support causes they believe in without fear of harassment or intimidation. HB 970 is an important step in guaranteeing privacy protections for all Virginians in a manner consistent with last year’s U.S. Supreme Court decision in Thomas More Law Center v. Bonta, which affirmed that the First Amendment’s promise of ‘free association’ includes the right to privacy in financial giving. We thank Gov. Youngkin and the Virginia General Assembly for safeguarding the ability of Virginians to give freely and privately without unnecessary government interference.

As an organization dedicated to the preservation of Freedom of Conscience, ADF cites the following quotations from famous Americans about that liberty:

“I would rather be exposed to the inconveniencies attending too much liberty than those attending too small a degree of it.” –Thomas Jefferson

“Our faith journey isn’t just about showing up on Sunday for a good sermon and good music and a good meal. It’s about what we do Monday through Saturday as well, especially in those quiet moments, when the spotlight’s not on us, and we’re making those daily choices about how to live our lives.” – Michelle Obama

This column has been republished with permission from The Roanoke Star.

This entry was posted in General Assembly, Individual liberties and tagged Guest contributors. Bookmark the permalink.