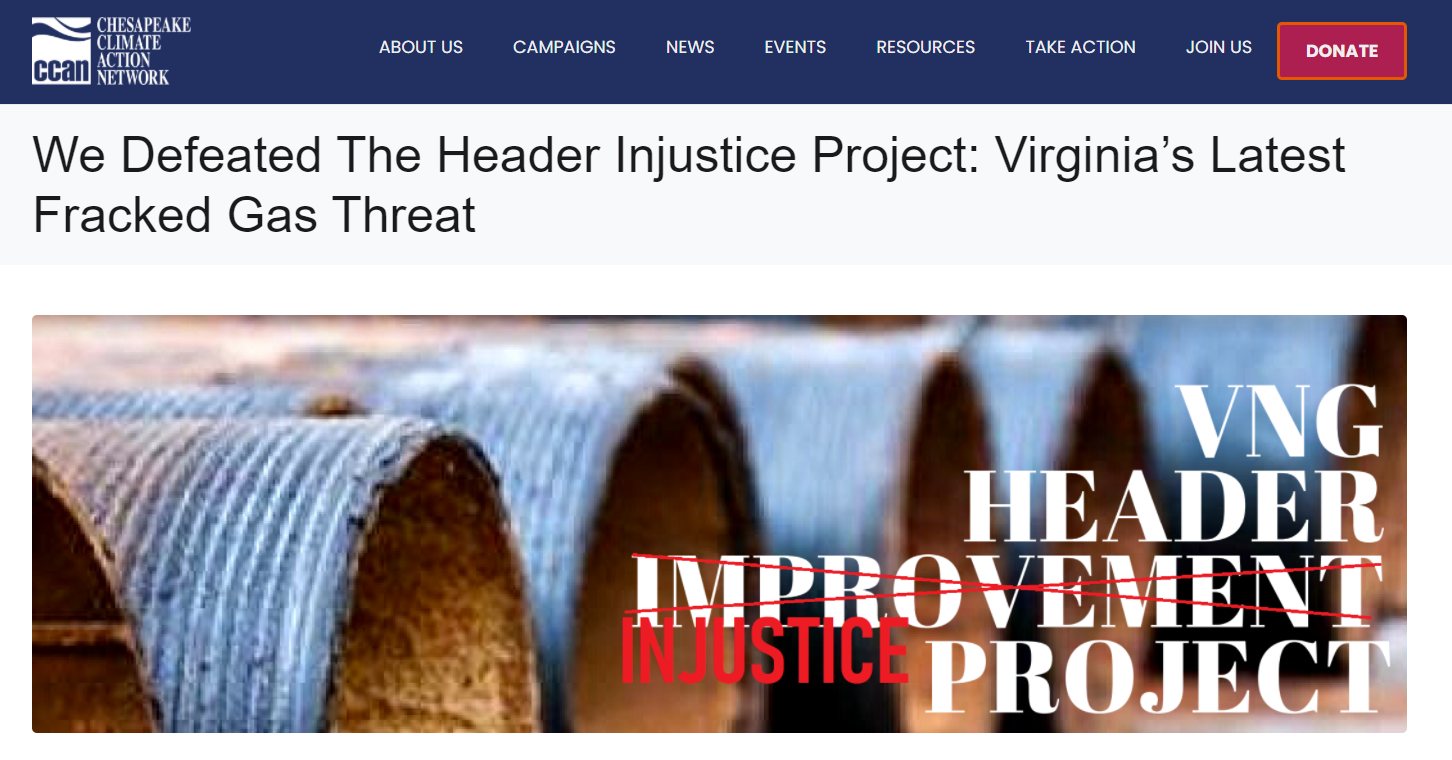 Chesapeake Climate Action Network webpage boasting about the defeat of a gas pipeline expansion, a signal seen by location managers all around the U.S.

It came just after Virginia’s economy showed especially anemic results in August employment data, capping a period of poor performance effectively described in a recent Bacon’s Rebellion post by Richmond economist A. Fletcher Mangum.  Virginia’s job growth this spring and summer has trailed the vast majority of other states, with the August data placing us at a shameful 47th out of 50. Simply achieving the national average growth rate that month would have meant 75,000 more jobs.

The anemic performance has causes, many a matter of government policy. One factor tied to government policy is federal contract spending, and while that proved a stable anchor during the recent COVID storm, in the period before and since it has provided little growth. Years of rhetoric about weaning the state off that dependence have produced little real change.

The path away from that dependence is private investment and growth. Compared to just a few years ago, is Virginia a better or a worse place to locate a new business or increase investment in an existing one? Has Virginia shown what is called in the business world “continuous improvement?” No.

Virtually all policy decisions in recent years have shown Virginia’s legislative and executive majority want to regulate and tax businesses more, empower organized labor and earn its gratitude, place an automatic escalator on the minimum wage, and unleash a flood of successful litigation on employers accused of any possible grievance an employee might raise.

Virginia’s Right to Work law is indeed an inch away from disappearing, and every business leader in the United States knows it. This election decides it. The major roadblock in the past two years has been a single senior Democratic senator and committee chair, Richard Saslaw of Fairfax, who is now widely believed to be retiring after this term. His power has already dissipated with that report.

In preparation, the legislature has authorized the establishment of public employee union contracts at the local level, which must inevitably spread to state workers. It has imposed Davis-Bacon prevailing wage controls to drive up labor costs on public contracts and made the project labor agreement model the preferred approach, in both state and local projects. Right to Work is one standing wall of a collapsed house, masking a now very pro-union climate, a thin façade which business leaders around the nation see past.

The Tax Foundation has a tax climate ranking which is well-regarded by the business community, even if dismissed by those who favor higher taxes.  Until recently Virginia was routinely in the top 20 for overall business taxes and top ten for corporate tax policy, but the 2021 ranking put us number 16 in corporate tax policy and in the bottom half (number 26) on overall business tax climate.

Faced with the opportunity to reap windfall state revenue from the 2017 federal tax changes, Virginia’s 2019 General Assembly offered modest tax relief to individuals and zero tax relief to corporations. Faced with a similar opportunity after Congress flooded businesses with COVID-related grants, the 2021 legislators got out their harvesters again and reaped more bounty.

The Atlantic Coast Pipeline is dead. A modest regional expansion of an existing natural gas line also serving Hampton Roads is dead, killing one and maybe two planned power plants. The Mountain Valley Pipeline which will bring more energy to Western Virginia customers remains embattled. Virginia’s existing government is openly and gleefully hostile to fossil fuels in all forms, when just a couple of states over, they celebrate and market their abundant gas supply.

Business leaders in the entire United States have noticed Virginia is now an anti-natural gas state, even at the local level. What energy is allowed is about to get expensive, Northeastern United States-level expensive, even Germany-level expensive.  All of the projections show heavier price rises for commercial and industrial users than for homeowners, by design, but these will obviously be passed on.  Energy costs for the poor will be subsidized by a new energy tax hitting the biggest users the hardest.

Most of the new investments allowed will be in solar and wind. Business leaders have seen what has gone on in solar and wind-reliant Texas, California, and now much of Europe. If energy reliability and costs really matter to a prospect, Virginia will lose the bid.

Sure, the CNBC network’s ranking put Virginia in first place again, but as explained before one new category saved the state from a downgrade and kept us above our rival North Carolina, the newly created “Life, Health and Inclusion.” The business climate headwinds described above may or may not hurt a future CNBC ranking, but they have filtered into the rooms where investment decisions are made. That is what matters.