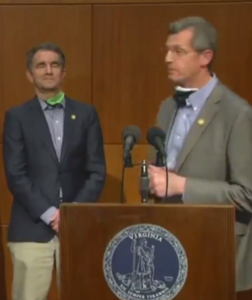 Reporter: Why can’t the state identify COVID-19 cases at individual nursing homes? Health Secretary Daniel Carey: Just as individuals have a right to protect personal health information, so do nursing homes. …. As for legislation, I’ll let the governor speak for himself. Governor Northam: “No, you’re doing fine.”

In a press conference yesterday, Virginia’s Secretary of Health and and Human Resources Daniel Carey stated that under current law the right of nursing homes to protect “personal health information” outweighs the right of the public to know which nursing homes have residents or employees infected by the COVID-19 virus and which do not.

By today’s count, 470 of Virginia’s 812 COVID-19 deaths — almost three out of five — have occurred in long-term care facilities. Through his emergency measures, Governor Ralph Northam has shut down much of the state’s economy, and out of a super-abundance of caution, he’s in no hurry to relax those restrictions. But most of the havoc generated by the virus isn’t out there in the workplace, or the nail salons, or the restaurants, or the beaches — it’s in nursing homes!

Kerry Dougherty raised the question of the public’s right to know in the previous post. She makes such an important point that I just had to hammer the nail a little harder in a separate post. The priorities of the Northam administration are mind-bogglingly misplaced.

If you have a mother in a nursing home, wouldn’t you want to know if COVID-19 was running loose in the facility? Wouldn’t you want the ability to act upon that knowledge and, perhaps, withdraw your family member until the threat had passed — or arrange to transfer her to a safer facility? In the world of medical ethics, isn’t this fundamental? Either Governor Ralph Northam doesn’t see it that way, or he is unwilling  or unable to articulate the principle at stake.

Consider the Governor’s press conference yesterday. A Roanoke Times reporter asked why the Virginia Department of Health can’t publish COVID-19 outbreaks by localities rather than health districts. (An “outbreak” occurs when ten or more confirmed COVID-19 cases occur at the same location. Most take place in nursing homes, although some occur in correctional facilities, hospitals, educational settings or workplaces.) Addressing the Governor, she said, you have cited the state code as saying you can’t state the number of COVID cases in nursing homes. A number of legislators have said they disagree with your interpretation. If they were to change the state code for purposes of clarity, would you contest that?

Northam didn’t answer. He asked Carey to address the question and slunk to the background.

Carey looked uneasy, but he tried to address the question. Both sides of the aisle had expressed an interest in changing the law, he said. The nub of the issue, he explained, was that “the Attorney General’s Office, in support of the Department of Health, in the past has said that, just like individuals have rights to their personal health information, nursing homes also have that right.”

I think you cited that in the press, both sides of the aisle had expressed, uh, that interest in changing the code, and I think that, uh, I won’t speak for the Governor, but you’re open to… I’ll let you, Governor, speak for yourself.

Carey stepped away from the podium, and Northam moved forward. With a slight wave of the hand, he said, “No, you’re doing fine.”

That was doing fine?

The idea that nursing homes have a right to protect personal health information is absurd. Individuals should have that right, but nursing homes should not. By publishing data stripped of personally identified information, the Virginia Department of Health would not violate anyone’s right to medical privacy. To the contrary, publishing the data on deadly viral outbreaks would provide Virginians vital information they need to look after their loved ones.

Ducking the issue also also obscures the Northam administration’s greatest failure in its response to the virus: its monomaniacal focus on shutting down the economy while letting the virus run unchecked in nursing homes.