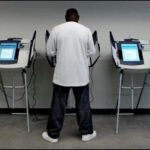 In a Restonnow.com opinion piece last month, Delegate Ken Plum, D-Reston, listed several accomplishments of the General Assembly in 2020. Several speak positively to the Commonwealth. One, however, is noteworthy for degrading election integrity.

“Non-discrimination legislation passed with the Virginia Values Act being one of the most comprehensive in the nation,” wrote Plum. “Voting laws were changed to make voting easier and more accessible as voters are now learning as they cast their votes in this election. Many Jim Crow-era laws were repealed.”[i] Speaker of the House Eileen Filler-Corn, D-Fairfax Station, and Senator Chap Petersen, D=Fairfax, joined Plum in voting in favor of the bill. Governor Ralph Northam signed the bill in April.[ii]

These identical bills eliminate all excuses previously required for a voter to be eligible to vote by absentee ballot. This allows any otherwise qualified voter to vote in person or by mail up to 45 days before the election. The bills make an exception for special elections when timing does not allow for 45 days of absentee voting. The language maintains the requirement (passed in 2019) that in-person absentee voting, or “early voting,” be available on the last two Saturdays before the election in all elections.[iii]

These bills expand the list of acceptable voter identification documents to include voter confirmation documents, any HAVA (Help America Vote Act)  compliant ID documents, and valid higher education student IDs, regardless of whether the voter has a photo or not. If the voter does not present an acceptable ID, he or she can sign an ID Confirmation Statement confirming his or her identity. Because a photo ID is no longer required, the bill relieves registrars’ duty to provide free voter ID cards.[iv]

This bill adds valid student IDs issued by institutes of higher learning located outside the state of Virginia to the list of acceptable forms of ID for voting.[v]

To prevent abuse and fraud of absentee ballots, voters should be required to demonstrate why they are unable to vote in person on election day or early voting. The Heritage Foundation explains several types of voter fraud and how they are accomplished. In-person voting using a state-issued Driver’s License, state-issued ID or U.S. Passport reduces the possibility of voter fraud due to voter impersonation, mail theft, exploitation of seniors, ballot harvesting, and identity theft.

Early voting should be allowed, but for a shorter period of time — perhaps starting the Friday before the election. This would allow voters to have as much information as possible prior to voting. In the 2020 presidential election, the last presidential debate was held October 22, 2020, ten days before the election. The Vice-Presidential debate was held October 07, 2020. Persons who voted before either of these debates or before information was released about either candidate would not be able to change their votes.

Allowing persons to use non state-issued forms of identification also allows for abuse, as they are often easier to obtain, harder to verify and don’t have the proof -of-identity requirements of state and federal identification. A person cannot use a college identification card or employer identification card to purchase alcohol, tobacco, open a bank account, or cash a check in Virginia. Nor can such identification be used for the purpose of proving one’s identity for employment purposes such as working in schools, as a paramedic or for other occupations. They should not be accepted for voter identity purposes.

The right to vote is arguably the most precious and important right that an American citizen has. With that right comes a tremendous amount of responsibility on both the part of the citizen and the Virginia Department of Elections (VDE). Citizens have the responsibility to properly register, to research the candidates, and to then vote. The VDE has the responsibility to ensure that elections are conducted in a fair and impartial manner in compliance with state law and that only people legally allowed to vote in Virginia elections do so.

The changes described above degrade election integrity in the commonwealth. Every Virginian who is eligible to vote should be able to do so. However, safeguards must be in place to ensure that only eligible voters vote.

This entry was posted in Electoral process and tagged Guest contributors. Bookmark the permalink.