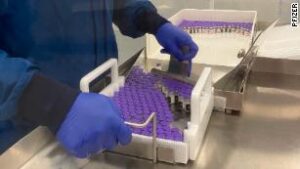 The Commonwealth is going to follow CDC guidelines and make health care workers and residents of long-term care facilities first in line for the COVID-19 vaccines. I have a different proposal.

Health care workers certainly should be first, no argument there. But, I would put teachers next in line. With teachers being vaccinated, schools could open, which would be great news for everyone.

According to today’s RTD, Virginia will be getting about 480,000 doses by the end of December. That is obviously not enough for all health care workers and all teachers. Therefore, K-3 teachers would get first priority after health care workers.

Even if one were to concede to going along with the CDC guidelines, I am befuddled at the approach of the Northam administration. “Gov. Ralph Northam said Friday that food distribution and infrastructure workers would like be prioritized, but said teachers may also be included further down the line.”

Teachers “included further down the line” after grocery store clerks? With the question of opening schools the biggest thing on everybody’s mind, you would think the administration would be making every effort to get teachers vaccinated so they would feel safe getting back in the classroom.

This entry was posted in Health Care and tagged COVID-19, Dick Hall-Sizemore. Bookmark the permalink.