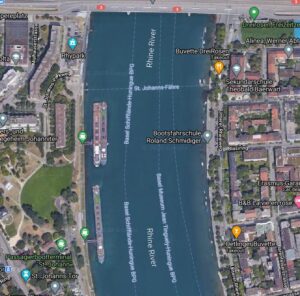 The Google satellite photo shows Rhine River cruise boats parked recently at Basel, Switzerland, probably including the one that my wife and I would have been boarding tomorrow morning. Losing a scheduled cruise is of no concern against all the other human and economic costs of this pandemic, but it provides a slightly different illustration for a COVID story.

It’s time for another check on how Virginia is doing.

The numbers on the Virginia Department of Health dashboard continue to show improvement. They should be encouraging. But there is strong reason to doubt them because of past instances when a flood of back data was added late. Sadly, an apparent downturn now may just create the opportunity for future overheated media reports about the inevitable uptick.

The seven-day average on deaths, which is calculated as of a week back to account for reporting delays, is now running about three per day as of October 1. But over the prior few weeks, similar readings were steadily in the 5-7 per day range (and looked like good news at the time) and have since been substantially increased. The same could very well happen to that October 1 figure.

Ditto for hospitalizations. The seven-day average for new admissions is now well below 30 per day, but it has been in the mid-30 range for some weeks. As late-arriving data fills in the prior dates, however, you can see that those numbers were premature and the counts rose.

In mid-August I noted the daily deaths had dropped to five per day or so. Today’s bar chart shows the seven-day average for that same August date now at 15. Put little credence in the current reported average of three per day. The VDH website does not instill confidence, perhaps because those filing the reports are slow. It does seem no Labor Day spike appeared.

Assuming all states have some of the same data challenges, Virginia is right in the middle of the pack when comparing states. Use this spreadsheet on RealClearPolitics.com and sort it by deaths per million and a wide range among the states remains. Before the rash of back data piled in a few weeks ago, Virginia was dropping even lower on the comparison, but has rebounded.

A similar spreadsheet on global statistics shows the United States remains in the top ten for deaths per million, but it seems more likely some countries are counting things differently or simply undercounting. Among our European allies, tiny Belgium and more populous Spain have had worse results than us so far, with the United Kingdom, France, Italy and Sweden doing just a bit better than the U.S.

For epidemiology doctorates in the future, a fascinating study will be comparing how well Africa has done compared to South America, given both have now been through winter and their natural flu seasons.

This is a highly-infectious disease, the mitigation strategies are imperfect and unpopular, and it continues to spread. Death from COVID-19 remains heavily correlated with older age and pre-existing comorbidities. About half of Virginia’s deaths are from outbreaks tied to nursing homes and senior care locations. The failure to control outbreaks has been the big problem.

Virginia continues to report zero deaths from the known outbreaks at its colleges and universities, public and private schools, and day care operations. That is more fodder for future research. Only the college-age cohort is catching this in substantial numbers.

The Center for Disease Control’s death tracking website is also still reporting that 92% of deaths are among people 55 or older. Since the pandemic tracking began, 41,149 Americans under 25 have died of all causes, with only 441 blamed totally or in part on COVID-19. The 99% under 25 who died from other causes are never mentioned, unless the car crash or criminal activity makes news.

Among infants under one, 22 have died of or with COVID-19 against 12,070 deaths from something else. That first year has always been high risk.

The CDC’s excess deaths tracker shows a fading impact at this point, but as previously noted it clearly demonstrates this is not just another round of bad seasonal flu and is still not over after six months. The previous flu epidemic was six weeks of (substantially fewer) excess deaths in the winter of 2017-18.  The CDC cannot, however, separate “excess” deaths related to COVID-19 from deaths caused by the resulting lockdowns, widespread panic, and despair.

Missing that cruise has caused us no despair, but I bet the cruise line employees are having a truly bad year.

This entry was posted in Business and Economy, Health Care and tagged COVID-19, Stephen D. Haner. Bookmark the permalink.