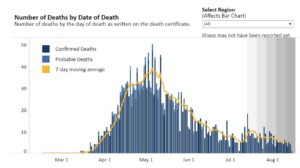 Isn’t this always the way? Just as the Virginia General Assembly arrives in Richmond to save us from COVID-19, Virginia’s number are getting way better.The 7-day average for deaths in the Northern Virginia region tracked by the Virginia Department of Health is zero. Zero. It has recorded zero deaths in August so far.

The statewide 7-day average, which tracks about a week back, has dropped to 5 deaths per day, the lowest average since the pandemic’s initial assault. That’s the chart above. Eastern Virginia’s 7-day death average is now below two per day, and here in the Central (read Capitol) region, is it about one death every other day. That region has had only six deaths recorded so far in August.

Tomorrow’s report could change all this, but things might hold for a while. The surges that followed Memorial Day and Fourth of July have abated, and now the merchants of fear are focused on claims that a return to school will cause yet another surge. It probably will, in cases, given the mass testing associated with that effort at colleges. But from the beginning, hospitalizations and the death rate have been the key metrics.

The Virginia Department of Health has the statewide test positivity rate at 7.0%, trending down. Johns Hopkins puts it at 6.0%. Below 5% is the target, and while not there, Virginia seems to be getting there. But that number is definitely driven in part by the number of tests being given. Virginia was testing more widely a month ago, as the VDH website shows.

Is this over? No. Is it time to just ignore any effort at mitigation? No. But when the numbers are getting worse, the media sets hair on fire. When they get better, it’s like they don’t even see it.