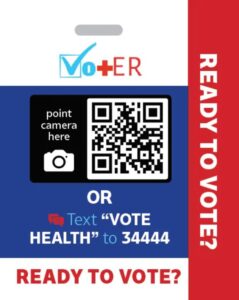 The Virginia Commonwealth University Health System has informed employees that it will participate in the VotER Initiative to encourage patients to register to vote and vote by mail.

“A large body of research tells us that sick Americans are less likely to vote,” commences the communication from Sheryl L. Garland, chief of health impact for the health system. “This is especially true of individuals who also have significant social needs, such as a lack of stable food and housing. All to often, these voices are not heard when decisions that affect their health are made.”

The email explicitly tied the initiative, which will start today, to VCU’s commitment to diversity and inclusion: “VCU Health’s Diversity, Equity, and Inclusion Statement states that ‘we will actively work to dismantle systemic racism and inequalities that may be entrenched in our health system.’ VCU Health’s participation in this initiative is a small but meaningful step toward fulfilling this commitment.”

According to the communique, VCU will place flyers in clinic waiting rooms and larger posters in high-traffic areas within the hospitals.

Garland explains how the initiative will work:

Patients can register to vote and request their mail ballot by texting “VOTE VCU” to 34444 or by scanning the QR code with their phone’s camera. We will provide clinics with handouts of this information in case patients have difficulty with the technology or would prefer to take the information home with them. We intend to place the posters in the environment next week, beginning on September 14th. We will remove the posters by October 23rd, the last day to request a mail ballot.

Our goal is to help patients register to vote and receive a mail ballot while ensuring that this effort is as unintrusive as possible to your clinical and administrative workflows. While your teams may wish to inform patients about the poster or proactively share handouts, there is no expectation to do so.

She closed with a “reminder” that VCU Health’s participation “is not intended to reflect support for or opposition to any candidate or political party. Under no circumstance should any VCU Health employees tell patients who to vote for  or which party to support.”

Bacon’s bottom line: VotER depicts itself as a non-partisan organization. And to be sure, VotER and VCU alike are careful not to endorse individual candidates or political parties. But there can be no doubt about the ideological aims of its “Healthy Democracy” initiative.

As the VotER website says, “VotER is built on a few core beliefs about healthcare, community and democracy.” Under the heading of Social Determinants of Health, it says, “We believe that empowered voices in communities leads to positive health outcomes.” The emphasis on “social determinants of health” is a leftist trope that attributes the variability of health outcomes by race and socioeconomic status to environmental factors and argues that the way to reduce disparities is to spend more public money on addressing those determinants.

Says Elizabeth Datner, an ER physician quoted on the VotER website: “We’re trying to bring resources to patients, both medical and non-medical, so that we can help our communities be healthier.”

Clearly, VCU Health is approaching this initiative with this mindset. The give-away is the explicit connection with the university’s diversity and inclusion statement, itself a leftist-inspired document.

Let me be 100% clear: There is nothing wrong with registering low-income minority voters. If VotER or the MCV Foundation want to raise their own money and use private resources on voter-registration drives in poor minority communities, then by all means do so. It is a very different thing for VCU Health, a publicly owned healthcare institution that receives hundreds of millions of taxpayer dollars, to devote public resources to this effort.

If VCU wanted to help community health, it could start by devoting some of its $200 million profit (2018 fiscal year for the VCU Medical Center alone) on programs that actually improve peoples’ health, such as, oh, I don’t know, conducting more health care screenings in poor neighborhoods, or educating poor people on how to take charge of their health, or stocking neighborhood stores with healthier foods, or underwriting community gardens, or sponsoring exercise programs for people suffering from obesity, or diabetes, or heart disease…

But, no, VCU is instead expending public resources on registering people to vote and send in mail-in ballots. And it is making the tie-in to inherently political matters such as food and housing policy.

I can vote, too, with my checkbook. And as long as VCU pursues ideologically driven yet self-serving initiatives like this, I refuse to donate a single nickel to any VCU-related cause. And if other Virginians are tired of community organizations inserting themselves into the political arena, they should make the same commitment.

This entry was posted in Health Care, Poverty & income gap and tagged James A. Bacon. Bookmark the permalink.