The War on Virginia’s History 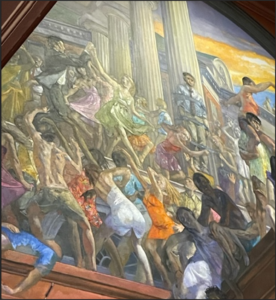 Anarchy and nihilism. Mural at the University of Virginia. Photo credit: Ann McLean

The United States is under a cultural and ideological attack that threatens its continuity and survival more than at any previous time in the 239-year history of the nation. And since the leaders of this attack think strategically, it should come as no surprise that Virginia would be in the crosshairs of a new kind of battle to transform America.

Virginia is the key state that gave birth to the United States, and this state has more historical sites than any other — approximately 130 in all. Yorktown and Appomattox Courthouse, both in Virginia, were the sites of the final battles of the Revolutionary War and the Civil War. Thus, America-haters know that if the history and culture of Virginia can be denigrated and rewritten, the rest of the country will be easier to take down.

Four of the first five U.S. presidents came from Virginia. George Washington, who led the Continental Army to victory in the War of Independence, would become the first president. Thomas Jefferson, who drafted the Declaration of Independence, became the third president. James Madison, the fourth president of the United States, drafted the Constitution. James Monroe, the fifth and last president among the Founding Fathers, was the brave 18-year-old volunteer soldier holding the American flag in Emanuel Leutze’s famous 1850 painting, “Washington Crossing the Delaware,” sitting in the boat right behind resolute commander-in-chief Washington.

Throughout the ages, there has been a struggle between freedom and tyranny. The United States is the only country in the history of mankind specifically founded on ideas and principles that would establish and protect people’s God-given rights and freedoms. It was Virginians who expressed these “first principles” in the Bill of Rights incorporated into the Constitution, and it is these first principles that are now under the fiercest attack in the present culture war to take down America.

Former President Barack Obama stated shortly before his election in 2008 that his administration would transform America. It turns out that, in his adolescence, Obama was mentored for many years by Communist Party member Frank Marshall Davis. Above all, communists understand that the rewriting of history is essential to gaining and then holding political power. All countries that have succumbed to communist rule — Russia, China, North Korea, and Cuba — had their histories rewritten to erase any connection the people had with their past. Cancellation and erasure are key to transformation. Karl Marx himself wrote, “Take away the heritage of a people and they are easily conquered.”

The University of Virginia (UVa), the only American university established by a Founding Father, Thomas Jefferson, embodied the spirit of our nation’s reliance on “the best that has been thought and said.” Jefferson’s university was known for its superb academics, unique atmosphere of decency and honor, and its special ethos of honorable dignity mixed with good-hearted camaraderie. Jefferson designed his “academical village” to promote ideas important to the 18th century, such as his observation that “Commerce between master and slave is despotism. Nothing is more certainly written in the Book of Life than these people are to be free.”

Admissions tours disparage Jefferson and include vulgar anecdotes and descriptions of riots and mayhem. Both the murals and tours mock the God-honoring vision of Jefferson, treating his ideals as shabbily as the bronze monuments of George Rogers Clark and another of Meriwether Lewis and William Clark, torn down last year.

Who among woke faculty teaches that George Clark was a revolutionary war hero promoted to brigadier general in 1781 by then-Virginia Gov. Thomas Jefferson, and a key figure behind the Northwest Ordinance of 1787, which outlawed slavery in an unsettled vast territory that would become five Midwest states? Who mentions that it was Lewis and Clark who took great risks and made sacrifices to explore the Pacific Northwest and Oregon territories, and made claim for the U.S. before others from Europe did? Melody Barnes, formerly President Barack Obama’s director of the Domestic Policy Council and now director of UVA’s Democracy Institute and co-director at UVA’s Democracy Initiative, takes credit for helping remove those statues.

For the new UVa elite, Virginia history has no special significance or value. The university supported a movement to remove the names of Jefferson and Madison from the regional library, named 50 years ago to honor the special friendship between the two founders, who worked together to produce the Constitution.

Jefferson and Madison and the other framers who gathered at the Constitutional Convention in 1787 had thoroughly studied democracy in all its forms and found them wanting — prone to corruption, intrigue, and abuse of power. That is the principal reason they arrived at a constitutional republic as the best form of government to protect people’s rights and provide more opportunity for the diverse American people.

In Lexington, Virginia, a similar assault on the state’s history is taking place at Washington and Lee University, a school that was rehabilitated by Robert E. Lee after the Civil War, when he became university president. Lee was remarkable in being one of only two to graduate without a single demerit from West Point in its 220-year history. Additionally, he strongly opposed slavery and freed the slaves on the plantations inherited by his wife before Lincoln’s Emancipation Proclamation.

Surely these accomplishments — along with voluminous testimony that Lee was beloved and admired as much by Union soldiers who knew him as he was by the Confederates — constitute an honorable legacy. But the history-haters at Washington and Lee don’t care. They fought to remove Lee’s name from the university he saved and tried to remove all vestiges of Lee from the school’s premises. It was decided to remove Lee’s name from the chapel but leave the full-size marble statue of the “Recumbent Lee” located there. But now alumni must fight to prevent the erecting of a brick wall to conceal from public view this monument of Lee. Apparently, cancel culture believes that if something cannot be seen, it no longer exists.

Admissions tour guides disparage Lee just as tour guides disparage Jefferson in Charlottesville. In late summer 2022, a student tour guide, who felt compelled to state his pronouns, summed up how he and others like to think about the very intentional alienating of affections they perform at Washington and Lee: “We kept the outside, the shell, and on the inside, we’re changing and evolving.”

Other Schools’ Erasure of History

Under Governor Ralph Northam, and now Governor Glenn Youngkin, many colleges across the state experience the same. The Virginia Military Institute removed the statue of Gen. Thomas Jonathan “Stonewall” Jackson, an orphan who persevered to great heights through discipline and Christian faith in God, becoming a dedicated and beloved teacher of cadets as well as black Sunday school students. Jackson’s name was sand-blasted off his famous arch, completely erasing him — along with his exemplary character, resolve, and military skill — as though he never existed.

Virginia’s community colleges have had names stripped: Lord Fairfax Community College has become “Laurel Ridge;” John Tyler (another former U.S. president) has become “Brightpoint.” James Madison’s namesake university has removed reference to those with significant accomplishments, such as Matthew Fontaine Maury, founder of the sciences of meteorology and oceanography, and developer of warfare submarines. Similar agendas have wrought their erasure of history at the University of Richmond, William and Mary, and many high schools.

These changes at Virginia’s iconic academic institutions have all the signs of the totalitarian dystopia that George Orwell described in his classic, “1984,” wherein, “Every record has been destroyed or falsified … every picture has been repainted, every statue and street building has been renamed. … And the process is continuing day by day and minute by minute.”

Virginia’s house museums have been affected by the appointment of woke personnel to foundations and trusts that oversee the properties, as well as an influx of money. The Thomas Jefferson Foundation, on whose board of trustees Melody Barnes has served, and which administers and manages Monticello — the home of Thomas Jefferson — was the recipient of a $20 million gift from David M. Rubenstein, a co-founder of the Carlyle Group.

The woke remake of Monticello facilitated by Rubenstein’s money has turned the home and grounds of the Jefferson estate into a critical race theory indoctrination tour. Visitors are bombarded with unending references and slander of Jefferson as being a slaveholder. Omitted are such monumental ideas of forward-looking progress expressed by Jefferson in the Declaration of Independence such as “all men are created equal.” Nowhere is there so much as a mention that his document was the first government edict anywhere with a vision to end slavery.

At Montpelier, home of Madison, similarly affected by $10 million from Rubenstein, not one American flag flies on its 2,650-acre site. Madison’s beliefs, which led to the drafting of the U.S. Constitution and the Bill of Rights, are sacrificed to a fixation on slavery and racism. The bookstore is replete with works on critical race theory, rather than on the profound thinking and ideals that motivated the Father of the Constitution.

In conclusion, it is increasingly obvious to many with a generation or more memory of Americana that the United States is undergoing a sweeping, Communist-type revolution — one that is not dissimilar from the Chinese cultural revolution. What stands in the way of the completion of this domestic communist revolution are the Judeo-Christian values that still reside in our culture and documents conceived of and fought for by Virginians: the Declaration of Independence, Northwest Ordinance of 1787, Constitution of the United States, and the Federalist Papers.

America’s enemies know they cannot win on the battlefield of ideas because truth will win over falsehood. Their method of operation is to destroy America piecemeal, through its culture, using Marxist tools of demoralization and division. Virginia is the kingpin of the strike that takes down the other states and the country.

G.K. Chesterton reminds us that “the disadvantage of men not knowing the past is that they do not know the present.” Virginia’s political leaders and philanthropists need to wake up. The hour is late, and it is time to get out of denial that so much of what is happening is playing into the hands of our enemies, who want to strip us of our virtuous heritage so that they may subdue America without firing a shot.

Scott S. Powell is senior fellow at the Discovery Institute and author of “Rediscovering America,” a number 1 Amazon new release. Ann McLean received her M.A. and Ph.D. from the University of Virginia, and serves on the Jefferson Council, the Virginia Council, and the Republic of Virginia preservation groups.

This column first appeared in The Federalist and has been republished with permission.

This entry was posted in Culture wars, Virginia history and tagged Ann McLean. Bookmark the permalink.