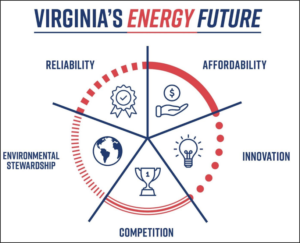 Virginia’s energy policy needs to establish a better balance between cost, reliability, and environmental sustainability, says the Commonwealth of Virginia’s 2022 Energy Plan. In practice, that means backing off rigid timelines to achieve a net zero carbon electric grid and investing in emerging technologies such as hydrogen, carbon capture, and small modular nuclear reactors.

“The plan adopted in recent years by the previous administration goes too far in establishing rigid and inflexible rules for the transition in energy generation in Virginia,” stated Governor Glenn Youngkin in the introduction. “We need to recognize that a clean energy future does not have to come at the cost of a healthy, resilient, and growing economy.”

The Virginia Clean Energy Act (VCEA), which sets Virginia’s electricity policy, calls for phasing out all coal and natural gas plants by 2045 in Dominion Energy’s service territory, and 2050 in the rest of the state. That timetable, says the 2022 Energy Plan, is arbitrary. Virginia policy needs to “embrace a measure of humility” regarding the ability to predict energy demand and technological innovation 30 years from now.

“The only way to confidently move towards a reliable, affordable and clean energy future in Virginia,” wrote Youngkin, “is to go all-in on innovation in nuclear, carbon capture, and new technology like hydrogen generation, along with building on our leadership in offshore wind and solar.”

While the plan supports the ultimate goal of achieving a net-zero electric grid — meaning that electric utilities’ power sources emit no carbon-dioxide — it also emphasizes the critical importance of reliable, low-cost electricity to power the economy. Electric tariffs have surged in recent years, the report says, and the phase-out of base-load natural gas would put the reliability of the system at risk.

“While VCEA’s ambitions for carbon reduction appear laudable, they come with substantial future risk. VCEA’s mandates are an inflexible, 30-year determination with a prescribed route that currently cannot be delivered and do not contain any guidelines ensuring reasonable energy costs for Virginian consumers,” states the plan. “Blindly complying with VCEA exposes Virginia families and businesses to outsized energy costs, risks the reliable delivery of energy, and closes Virginia to innovative energy sources and technologies.

Virginians’ demand for electricity has grown over the past decades, confounding arguments advanced by environmentalists that demand was stable or declining. The Youngkin plan contends that demand for electricity will continue to increase. “Our future needs will intensify demands on the grid as Virginians purchase electric cars, building owners increase electrification, and the Commonwealth continues to lead and expand in energy-intensive sectors as data center services and high-tech indoor farming agriculture.”

Dominion, which has been accused of inflating its demand forecasts, actually has low-balled its projections and has had to revise forecasts upwards. The chart below shows Dominion’s forecasts of peak summer electricity demand over four years. The projections show increased demand over time — and those projections themselves have increased. 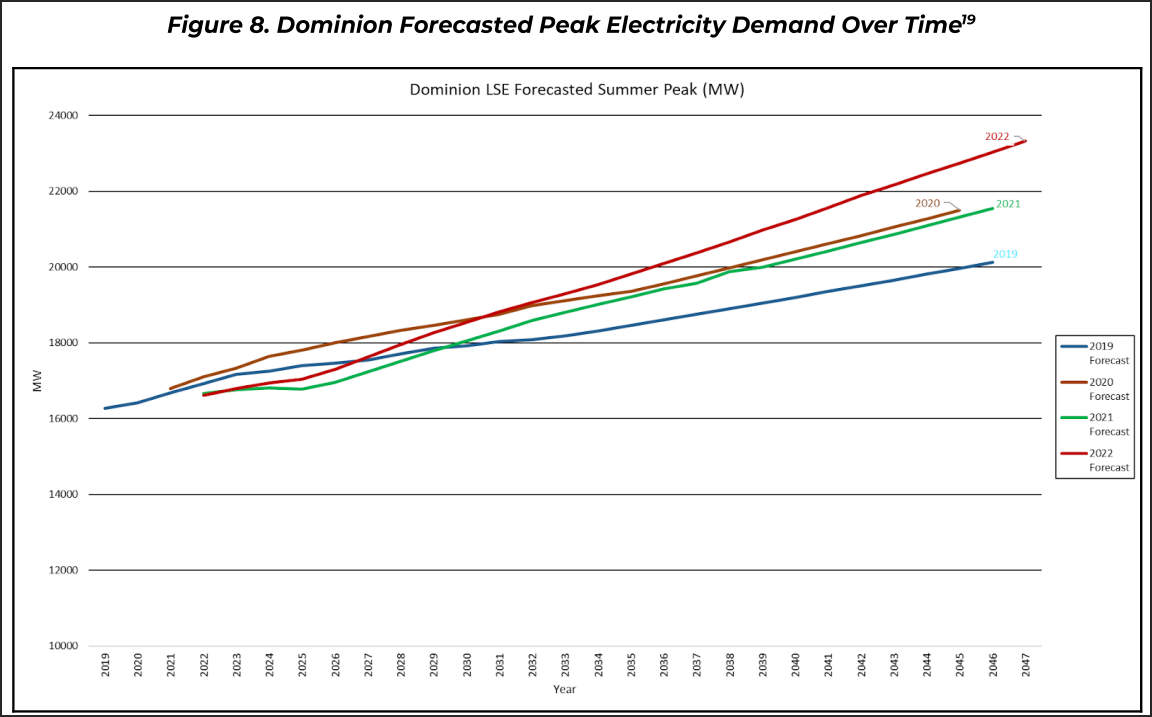 If the state maintains its goals for zero carbon emissions from vehicles, forcing Virginians to convert to electric vehicles, electricity demand will increase by 6,000 GWh annually, boosting total demand about 25% to roughly 32,000 GWh, contends the plan. “Transitioning from baseload generation while attempting to accommodate this increase in electricity demand could be a disastrous combination for Virginia’s grid reliability.

California, which is ahead of Virginia in pursuing zero-emission goals in its electric grid and automobile fleet, provides an example of what the New Dominion can expect from blind adherence to the Virginia Clean Energy Act. California, notes the plan narrative, now is “asking drivers to refrain from charging their electric vehicles to prevent blackouts.”

Given the current state of technology, Virginia cannot rely upon Dominion’s four nuclear power units alone to provide base-load electricity requirements. Solar and wind have lower variable costs, but there is no way to ramp output up and down in concert with electric load. The only technologically mature alternative available now is battery storage, but that is cost-prohibitive — more than four times that of a solar generator on a levelized basis.

“While investment in battery innovations is an economic development opportunity that can produce meaningful breakthroughs in the future,” says the plan, “a prudent energy plan should not force the retirement of economically viable baseload generation. Until battery and grid modernization technologies mature and are deployed for intermittent energy generation at affordable costs, the Commonwealth should not consider these sources as viable substitutes for current baseload technologies.”

The reaction of environmental groups has ranged from the pragmatic to the apocalyptic. Although the Youngkin plan gets some things wrong, responded Clean Virginia in a press release, the 2022 Energy Plan does “sound the alarm for unsustainable energy costs for Virginia families.”

The Southern Environmental Law Center blasted the administration’s “misguided call to repeal Clean Cars standards.” The administration “doubles down on the misinformation campaign” against Clean Cars, and unfairly demonizes clean energy as the cause of rising electricity costs.

The Chesapeake Climate Action Network described the plan as “a veiled threat to Virginia’s clean-energy progress in recent years and threatens to move the Commonwealth backwards during the world’s last-chance decade to solve climate change.”