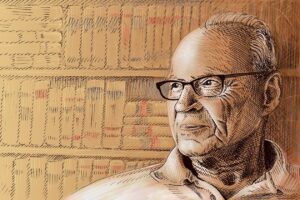 Others in this space and I have been asking readers to confront what we oppose: critical theory in education, a Marxist-based philosophy that in its execution is designed to tear down the American culture and start over. We see that philosophy today personified in critical race theory and state-directed intrusions in its favor.

To try to provide historical perspective to some of those discussions, I will offer a brief survey of proponents of a more constructive path for K-12 education, directed specifically to improve the performance of poor minority children.

The ones I have selected feature the work of, Richard Rorty,  E. D. Hirsch Jr. and Naomi Schaefer Riley. Drs. Rorty and Hirsch were professors at the University of Virginia.

Dr. Hirsch and Ms. Riley are not exactly what you expect.

With a Ph.D. from Yale, Dr. Rorty taught philosophy at Princeton for 20 years, humanities at Virginia for 16 years and comparative literature at Stanford for seven until his retirement. He has passed away. Politically, he was a centrist classical liberal who called out members of the academy both left and right for what he thought was shoddy scholarship and overreaching conclusions.

Eric Donald Hirsch Jr., 91, is professor emeritus of education and humanities at the University of Virginia. Hirsch is best known for his work on cultural literacy. Hirsch himself is an avowed Democrat who has described himself as “practically a socialist.” He resides in Charlottesville.

To improve the chances of America’s poorer children, he has advocated expanded access to preschool, and his cultural literacy work was foundational to the Common Core state learning standards developed by the National Governors Association in 2009.

Forty-one states, the District of Columbia, four territories, and the Department of Defense Education Activity (DoDEA) have adopted the Common Core State Standards Hirsch advocated. Virginia has not.

It is especially distinguished for her firing by the Chronicle of Higher Education blog. She made a post in 2011 entitled “The Most Persuasive Case for Eliminating Black Studies? Just Read the Dissertations.”

The sequence of events that followed is now familiar. Huge firestorm on the left; initial support by the editor; denunciation of the editor; and firing of Ms. Riley.

Ms. Riley is also the mother of three children whose father, Jason Riley, an author, pundit and member of the Wall Street Journal Editorial Board is black. Her commentary, “My Kids and Their Elite Education in Racism,” is informed by their experiences raising mixed-race children.

“Cultural Literacy: What Every American Needs to Know”

This book was a cultural phenomenon and sold over a million copies. It drove a nationwide debate on our educational standards. Cultural literacy refers to the concept that citizens in a democracy should possess a common body of knowledge that allows them to communicate effectively, govern themselves, and share in their society’s rewards.

Progressives had dominated educational theory and practice for decades when this book came out, but had been unable to improve educational outcomes for low-income students, particularly African-Americans and Latinos. From a review:

“Hirsch opposed the long-accepted view of educator John Dewey, who argued for a child-centered pedagogy that stressed experiential learning. Rather, Hirsch maintained that early education should focus on content and that all students, not just a bright few, could achieve cultural literacy.”

It challenged the progressive grip on education.

Critical theorists today as then are directly and unalterably opposed to the entire approach and certainly the optimistic outcomes sought by Dr. Hirsch.

Most of us, despite the outrage we may feel about governmental cowardice or corruption, and despite our despair over what is being done to the weakest and poorest among us, still identify with our country. We take pride in being citizens of a self-invented, self-reforming, enduring constitutional democracy. We think of the United States as having glorious — if tarnished — national traditions.

Many of the exceptions to this rule are found in colleges and universities, in the academic departments that have become sanctuaries for left-wing political views. I am glad there are such sanctuaries, even though I wish we had left a more broadly based, less self-involved and less jargon-ridden than our present one. But any left is better than none, and this one is doing a great deal of good for people who have gotten a raw deal in our society: women, African-Americans, gay men and lesbians. This focus on marginalized groups will, in the long run, help to make our country much more decent, more tolerant and more civilized.

But there is a problem with this left: it is unpatriotic. In the name of “the politics of difference,” it refuses to rejoice in the country it inhabits. It repudiates the idea of a national identity, and the emotion of national pride. This repudiation is the difference between traditional American pluralism and the new movement called multiculturalism. Pluralism is the attempt to make America what the philosopher John Rawls calls “a social union of social unions,” a community of communities, a nation with far more room for difference than most. Multiculturalism is turning into the attempt to keep these communities at odds with one another.

The Harvard Educational Review, not expected to be a fan of Hirsch’s positions, reviewed this work quite positively.

Although his recommendation that schools should explicitly impart that body of knowledge led some educators to write him off as a conservative champion of Western civilization and the “Dead White Males,”  … His most recent book, The Knowledge Deficit: Closing the Shocking Education Gap for American Children, extends his previous argument by identifying the problem with U.S. education and exploring the three kinds of knowledge students need to read effectively — knowledge of language conventions, vocabulary knowledge, and domain-specific background knowledge. It also offers recommendations about the efficient allocation of instructional time, the kinds of tests needed to ensure content mastery, and the content standards we need as a nation.

The Knowledge Deficit asserts that the problem with U.S. education is not inadequate teachers; rather, it is a set of misguided ideas in which teachers have been taught to believe.

The Knowledge Deficit should be required reading for public school reformers. Hirsch’s call for a greater emphasis on history, science, and the arts offers a long-overdue antidote to these subjects’ increasing marginalization in public education. By advocating a content-rich national curriculum, he calls boldly for the kind of sweeping reform that might genuinely promote equity in our nation’s schools.

“My Kids and Their Elite Education in Racism”

?How Rye Country Day School reflects the madness of our times”

Her compelling article offers us a glimpse by a mother of mixed-race children into the very real and negative repercussions of a single-minded focus on race in K-12 education. She recounts the experiences of her own children.

Some of you will perhaps take the position that such things can never happen in Virginia schools. Every evidence from the wider national experience is that you are incorrect.

The subtitle of this article writes: “Education’s dumbing down frays the bonds of citizenship and is hardest on the poor, says E.D. Hirsch, the man who wrote the book on cultural literacy.”

If you have school-age children, the pandemic-induced move to online classes may give you an unusual window into their education. E.D. Hirsch expects you’ll be surprised by “how little whole-class instruction is going on,” how little knowledge is communicated, and how there is “no coherence” from day to day, let alone from year to year.

The current fashion is for teachers to be a “guide on the side, instead of a sage on the stage,” he says, quoting the latest pedagogical slogan, which means that teachers aren’t supposed to lecture students but to “facilitate” learning by nudging students to follow their own curiosity. Everything Mr. Hirsch knows about how children learn tells him that’s the wrong approach. “If you want equity in education, as well as excellence, you have to have whole-class instruction,” in which a teacher directly communicates information using a prescribed sequential curriculum.

He cites both history and neuroscience in explaining how education went wrong. It began in the 1940s, when “schools unbolted the desks and kids were no longer facing the teacher.” Instead children were divided into small groups and instructed to complete worksheets independently with occasional input from teachers. “That was also when our verbal test scores went down and the relative ranking of our elementary schools declined on a national level.” On the International Adult Literacy Survey, Americans went from being No. 1 for children who were educated in the 1950s to fifth for those in the ’70s and 14th in the ’90s. And things have only gotten worse. Between 2002 and 2015, American schoolchildren went from a ranking of 15th to 24th in reading on the Program for International Student Assessment.

The problem runs deeper than the style of instruction, Mr. Hirsch says. It’s the concept at its root — “child-centered classrooms,” the notion that “education is partly a matter of drawing out a child’s inborn nature.” Mr. Hirsch says emphatically that a child’s mind is “a blank slate.” On this point he agrees with John Locke and disagrees with Jean-Jacques Rousseau, who thought children need to develop according to their nature. Both philosophers make the “Cultural Literacy” list, but “Locke has to make a comeback” among educators, Mr. Hirsch says. “The culture is up for grabs, and elementary schools are the culture makers.