One Thursday morning, in early August, author Ibram Kendi tucked Apple AirPods into his ears and nestled into his seat in front of a camera to chat online in an “exclusive” “conversation” with principals, teachers and staff of Fairfax County Public Schools. An hour later, he was done, and laudatory messages rolled over Twitter, quoting Kendi on “systemic racism,” “the cradle of racism” and “inequity.”

As I reported yesterday in a new column at Quillette, coauthored with attorney Glenn Miller, the price tag for the one-hour call over the Zoom teleconferencing platform? A whopping $20,000, or about $333.33 per minute.

To Fairfax County Public School parents such as Miller and me, paying so much money for a virtual “conversation” is particularly galling considering the fact that Fairfax County Public Schools eliminated the position of outreach coordinator to underrepresented minorities seeking to attend the high school — Thomas Jefferson High School for Science and Technology — that our sons attend. In the wake of this failure, we wrote that Fairfax County is forcing through the bureaucracy a lottery system that earns a resounding “F” from community members, including parents, students and alumni. 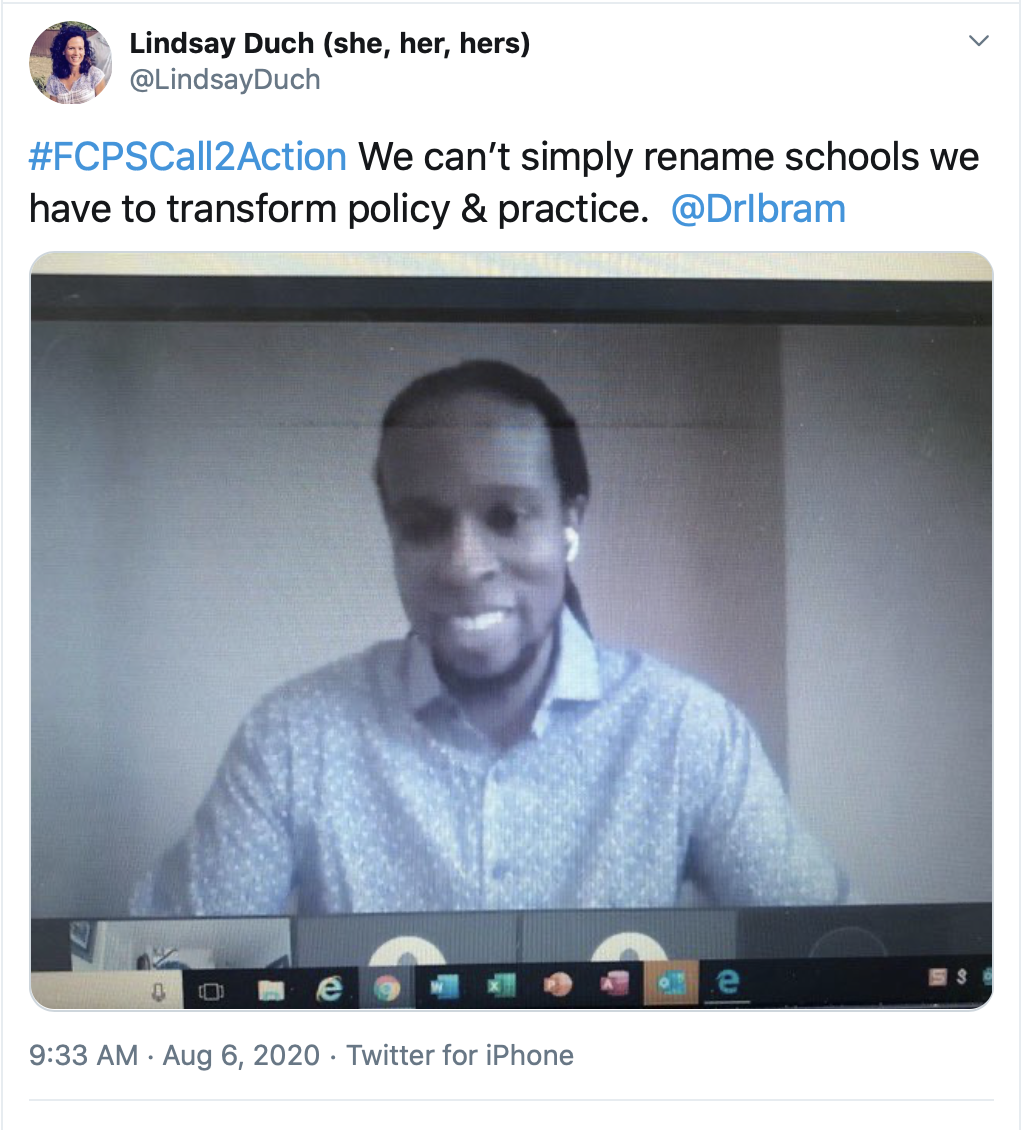 The contract reveals just one manifestation of a budding enterprise by ideologues of a controversial philosophy called “critical race theory,” which has infused all aspects of society from federal government to elementary schools, training, teaching and pushing the propaganda of its movement that “white supremacy” infuses American society. Importantly, the trainings have been widely criticized for its shaming of people based on the weaponization of identity politics.

Below is the full five-page contract, No. 247981511, from Kendi’s Penguin Random House Speakers Bureau, marked “confidential” and signed by Fairfax County Public Schools Superintendent Scott Brabrand. The call was for a “45-minute moderated conversation” in a “Virtual Event,” “followed by a 15-minute Q&A.”

“No travel required,” the contract said. And if travel was required, Kendi, who has argued against “privilege” and “capitalism” as evils in society, the contract stipulated that he would get “refundable, first class air fare,” as well as “fully licensed car service” for local transportation. 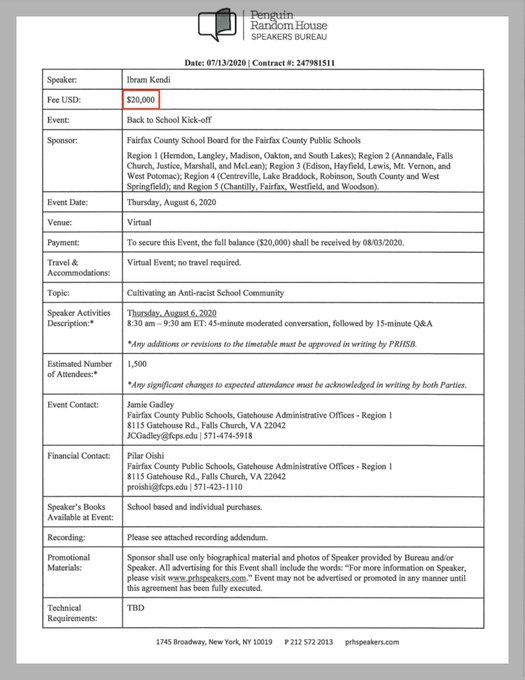 In a lesson for parents everywhere, I received the document from Fairfax County Public Schools by simply asking for it. Because public school systems are, well, public, their records are also supposed to be public.

In the one-hour “conversation,” Kendi repeated many of talking points he had made at the University of Pittsburgh in July (such as “the maintenance of racism”) as well as at stump speeches he has given throughout the world.

As Fairfax County teachers and staff pinch pennies through another pay freeze this year and parents wonder if the school system will repeat its springtime failure to effectively deliver remote learning, the news of cost hit parents, staff and community members like a ton of bricks, with calls for Brabrand’s resignation in community forums, such as DC Urban Moms. Page 2 of the contract revealed the contract and fee, which was “Accepted by the Fairfax County School Board for the Fairfax County Public Schools,” has Brabrand’s signature scrawled above the “signature” line.

Public school systems are the latest source of business enterprise by “consultants” like Kendi and his fellow “critical race theory” ideologues, following their successful penetration of colleges and universities. Recently, the Office of College Relations at Davidson College in Davidson, N.C., sent an email dispatch to alumni with the news that the college had not only booked Kendi for a similar Zoom talk on September 22, but it had bought 2,500 copies of How to Be an Antiracist “for students, faculty and staff” so they can “fully engage” in the discussion. The school noted the talk wouldn’t be recorded, “per the terms of the contract.”

Indeed, the Kendi contract with Fairfax County Public Schools has the same terms. That didn’t keep school staff from fawning over him on Twitter last month.

Another staffer fawned over the speaker: “How do you define an intellectual? I love Dr. Kendi’s point… measure by the desire to learn!!”

Asra Q. Nomani, a former Wall Street Journal reporter, is the mother of a Thomas Jefferson High School student. This article is republished with permission from her substack.com account