The Latest Casualty of the Culture Wars 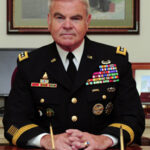 J.H. Binford Peay III, superintendent of the Virginia Military Institute, has submitted his resignation, stating that Governor Ralph Northam and senior legislations had “lost confidence” in his leadership. The VMI board accepted his resignation “with regret.”

While racist acts have occurred at VMI in the past several years, most cited by the Washington Post were punished by the administration or involved private expressions of opinion by students or staff. I detailed my response to the Post article here.

Peay had tried to thread the needle between maintaining long-held VMI traditions, which revered Stonewall Jackson and the role of the cadets in the battle of New Market, and being sensitive to the feelings of African-Americans who comprised an increasing percentage of the student body. He enacted several reforms earlier this year but critics charged they did not go far enough.

We are now in the witch hunt phase of the anti-racism hysteria as the definition of what constitutes “racism” broadens inexorably and anyone who fails to submit to the ever-mutating orthodoxy is crushed.

Remarkably, Northam, whose VMI nickname was “Coonman,” has not only survived his blackface scandal but has emerged as popular in public opinion polls as ever. He earned indulgences from fellow Democrats and the media by implementing “anti-racism” Critical Race Theory in Virginia public schools, embracing the doctrine of opposing “environmental racism,” and implementing other anti-racism measures in state government.

This entry was posted in Culture wars, Education (higher ed), Race and race relations and tagged James A. Bacon. Bookmark the permalink.

14 responses to “The Latest Casualty of the Culture Wars”