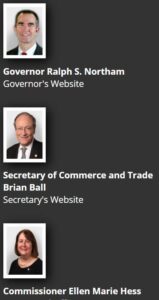 So much dysfunction…. at so many levels.

The federal government has been throwing trillions of dollars into COVID-19 relief. Many billions have flowed into Virginia. Despite this unprecedented peace-time spending, thousands of Virginians are being evicted from their homes, and thousands more are lining up at food pantries and soup kitchens. Why? Because government agencies can’t get the relief money to them in a timely fashion.

Look, I understand. Times of crisis require time to adapt, whether you’re a government agency or a private company. There’s no magic wand to wave to make massive economic dislocations painlessly disappear. But we can legitimately compare the performance of Virginia to other states. And by the basic criteria of handing out unemployment insurance payments to people who have lost their jobs, the Commonwealth appears to be doing a colossally poor job.

“Virginia continues to rank last in the country in key performance metrics tracked by the U.S. Department of Labor,” reports The Virginia Mercury. “The federal data shows the situation has only gotten worse as the pandemic continued, even as businesses have begun reopening and new claims have dropped.”

The number of disputed claims reviewed within three weeks — the maximum amount of time federal officials say it should take — dropped from 4.1 percent at the end of last year to 2.4 percent in the first three months of this year. Both figures put Virginia dead last in federal rankings.

For claims awaiting appeal, the average wait time now sits at 247 days, the third highest in the country, according to the Department of Labor.

In practice, that means some Virginians will have been left waiting a year or more for financial assistance that was intended to serve as an emergency stop gap after an unexpected job loss.

A year? No wonder Virginia is experiencing a social crisis!

Team Northam has a variety of excuses — blaming outdated technology and a shortage of employees qualified to review claims.

A shortage of qualified employees…. Hmmm…. How long does it take to train an employee to review unemployment claims? THIRTEEN MONTHS? The COVID epidemic reached Virginia in March last year. Jobless claims began surging right away. The Virginia Employment Commission was swamped soon after. This is not a new problem.

Where is her boss, Secretary of Commerce and Trade, Brian Ball?

Where is his boss, Governor Ralph Northam?

That’s three levels of dysfunction right there. But there’s more… and it’s not all Team Northam’s fault. We hear from the Mercury that Northam has a “chief workforce advisor,” Megan Healy. The agency had begun reassigning and retraining staff to help work through the backlog, Healy says, but changes to federal programs in December interrupted the effort because it led to a slew of new applications. Thanks, Uncle Sam.

Also, Healy says, wait times continue to stretch out because applications have gotten more complicated. Many claims involve disputes in which employers claim applicant are not entitled to benefits because they voluntarily quit or refused to work. That raises an entirely different question, which I don’t see anyone asking about: How many people are trying to game or cheat the system? In our entitlement society, the rot runs deeper than mere government incompetence.

Meanwhile, Healy says the state is in negotiations with a private vendor to bring on an additional 100 staffers to help with adjudications — a move that would double the current staff.

Wait… the state is “in negotiations?” In other words, the staff has yet to be hired? How long will this take? How many more poor people will be evicted from their homes? How many will have their electricity cut off? How many are racking up interest and penalties on their credit cards?

Pat Levy-Lavelle, an attorney with the Charlottesville-based Legal Aid Justice Center is not impressed. Maryland took a similar step back in February — and hired 300 more adjudicators. Virginia’s action is better late than never, he says. However, “I think it’s unfortunate that Virginia has been as slow and taken as long as it has to realize the scope of the crisis. And to be honest I don’t think they even own up to exactly how bad it is here, even now.”

This entry was posted in Efficiency in government, Labor & workforce and tagged COVID-19, James A. Bacon. Bookmark the permalink.