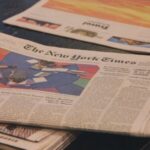 After 42 years in newspapers, having dedicated my adult life to that once-proud industry, I now read papers with a sense of dread. All too often that turns to disgust.

Rarely do I stumble on a newspaper piece that delights anymore.

The reasons are many, and you’ve heard them all before: Newspapers, which once were flush with money, are circling the drain. Staffing is down sharply, senior writers and editors have been pushed out the door and the journalists left behind are overworked and often inexperienced.

Beyond that, there has been a seismic shift in the world of news. Where once reporters were expected to strive for objectivity, they are now allowed to sprinkle commentary into headlines and stories.

Hand me any newspaper and I’ll find you an example in under five minutes.

Over the weekend, I saw an AP headline that ran in my local paper that — while technically correct — managed to toss gasoline on the seething defund-the-police movement. 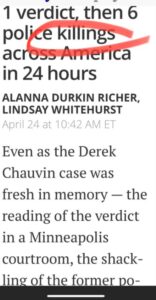 Police killings. Would it have killed the copy editor who slapped this inflammatory headline on the piece to simply call them police-involved shootings?

Killings suggests something cold-blooded, deranged. Murder, even. We can argue about the tragedy of Ma’Khia Bryant of Columbus, but anyone who’s watched the tapes of the shooting can see that the officer reacted to save the life of the girl she was about to stab.

Odd. While the Associated Press is worried about offending women who sleep with married men — newspapers have been told by AP not to call these women “mistresses” anymore — it has no qualms about painting police officers as cold-blooded killers.

Any wonder why circulation is plummeting and trust in the media is at an all-time low?