Such Words Have “No Place in Virginia” 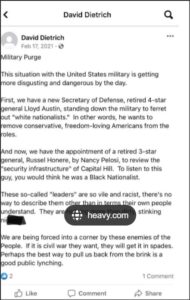 Governor Glenn Youngkin did the right thing by demanding the resignation of David Dietrich, a Hampton Republican Party official serving on the city electoral board, for making a racist Facebook post.

In accusing certain senior military officials of persecuting “conservative, freedom-loving Americans,” Dietrich referred to them as “nothing more than dirty, stinking N—–s.” If they want a Civil War, they’ll get one, he added. “Perhaps the best way to pull us back from the brink is a good public lynching.”

Republican Party officials, from Governor Youngkin on down, have condemned the remark. “We unequivocally condemn all forms of racism and bigotry,” said Hampton GOP Chairman Philip Siff.

“As governor, I serve all Virginians. I won’t accept racism in our Commonwealth or our party,” Youngkin tweeted yesterday. “The abhorrent words of a Hampton Roads official are beyond unacceptable and have no place in Virginia. It’s time to resign.”

It’s sad to know that someone capable of using that kind of language is a member of the Republican Party. While Dietrich may have legitimate concerns about the leftist policies emanating from Washington, D.C., framing them in the racial terms that he did was wrong in every way that it’s possible to be wrong. Black people, and anyone who sympathizes with their struggles in American society, are totally justified in taking grave offense.

Moreover, Dietrich’s words will be used to characterize all Republicans as racist — no matter how swift and forceful the condemnations from GOP officials.

Most Republicans want the GOP to be a big tent party that is welcoming to all races and ethnicities. Under Glenn Youngkin, the GOP stands for opportunity for all Virginians. There is no place for racially exclusionary language. We must condemn outbursts of racism and bitter grievance. If that means expelling people like Dietrich, then let’s get on with it.