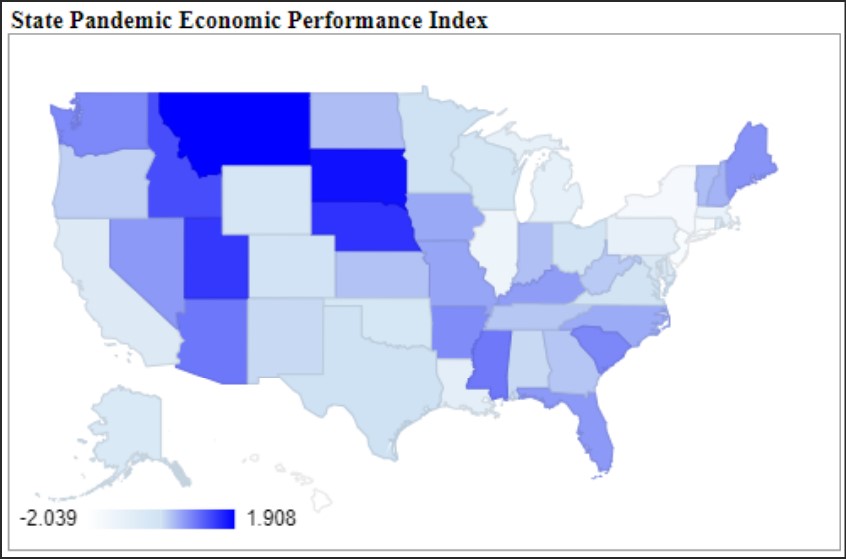 Source: The Committee to Unleash Prosperity

Nationally, there was little correlation, however, between the stringency of economic and school-related COVID lockdowns and health outcomes, finds the study, “A Final Report Card on the States’ Response to COVID-19,” published by the National Bureau of Economic Research. The authors were Phil Kerpen, Stephen Moore, and Casey B. Mulligan, all well-known free-market economists.

Former Governor Ralph Northam, a physician, can take some comfort in the fact that Virginia under his watch performed better than most other states in the COVID-related mortality rate when adjustments were made for age and the prevalence of obesity and diabetes risk factors in the population — 10th best in the nation.

However, when the perspective shifts to “all cause excess deaths,” which captures the mortality effects of lockdown policies such as higher drug and alcohol deaths, suicides, and foregone medical treatments, Virginia’s national ranking falls to 19th.

To gauge the severity of state COVID-lockdown policies, the authors developed an economic score encompassing unemployment and GDP components in 2020 and 2021, and an educational score, as measured by the cumulative percentage of in-person education, in the 2020-2021 school year.

Virginia’s adjusted economic rank was 33rd in the nation, indicating economic performance that was weaker than the national average over the course of the the pandemic.

The authors do not make the case that any particular mix of lockdown policies, with one exception, was better or worse than others. Rather, they argue that the overall severity of lockdown policies, as measured by economic impact and school closures, had no discernible impact on adjusted mortality rates. 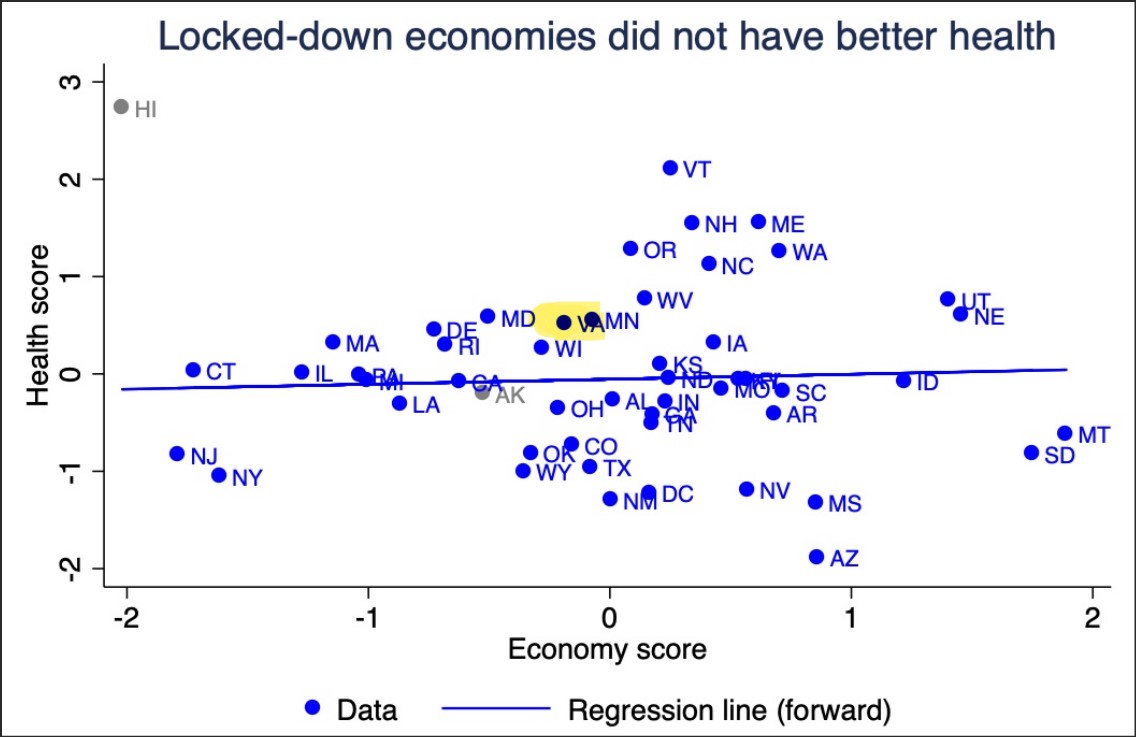 Virginia’s position on the graph is highlighted in yellow.

Another graph published in the study shows a modest positive correlation between school closures and health scores. The authors acknowledge the possibility of a correlation but argue that it is weak, citing a meta-analysis that concluded U.S. and European school lockdowns reduced COVID-19 mortality by only 0.2% on average.

Offsetting this modest benefit, the authors write, are negative long-term economic and health consequences not captured in the short-term figures. A National Institutes of Health analysis found that life expectancy for high school graduates is 4 to 6 years longer than high school dropouts. The OECD estimates that learning losses from pandemic-era school closures could cause a 3% decline in lifetime earnings.

The authors do point to one COVID-lockdown policy that could have had a measurable effect, but it was negative. Citing a comprehensive study showing that COVID-19 disproportionately occurred in nursing homes, they suggested that states that transferred COVID patients from hospitals to nursing homes, such as New York and New Jersey, performed worse in the mortality rankings.

This entry was posted in Business and Economy, Education (K-12), Health Care and tagged COVID-19, James A. Bacon. Bookmark the permalink.