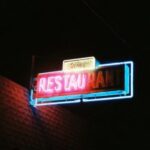 We waited at least 20 minutes after we were seated to place our drink orders. Another 15 to get our cocktails. Another 30 for appetizers (cups of soup) and another 30 for our entrees.

It was so late when we finished, we skipped dessert.

Welcome to the “new normal” in dining out: Painfully slow service.

It seems it’s the same almost everywhere. Restaurateurs, unable to hire employees who are cashing fat government checks for doing nothing, are hobbled by lack of workers.

Shoot, one oceanfront restaurant recently posted a notice on its marquee that read something like, “Be Patient We Have No Staff.” Another Beach establishment is plastered with “help wanted” signs — even in the ladies’ room.

I’m not complaining about my Saturday night dining experience, simply observing. Despite the desultory service, dinner was delish and the company was even better. Our server was cheerful, just slow.

As a former waitress, my guess is she had too many tables.

I won’t name the establishment other than to tell you it’s in Norfolk and the food is terrific. I’ve eaten there at least four times since indoor dining was permitted again in Virginia and the service now is markedly worse than it was last September.

As we waited — and waited — for dinner we talked about that moment at President Biden’s CNN Town Hall last week when an Ohio restaurant owner named John complained about how hard it was to hire wait staff because of the generous government benefits the unemployed receive.

The president basically rebuffed John’s concerns with this glib statement:

“If you noticed, we kept you open.“

Actually, Mr. President, that’s a lie. The government didn’t keep restaurants open. In fact, most governors shut them down. Some were able to limp along on takeout orders, but there weren’t many industries that suffered more devastation from the lockdowns than restaurants, bars and clubs.

Estimates of the carnage vary wildly. It’s been reported that more than 1,000 New York restaurants went under during the pandemic. And ABC news claimed this spring that one third of all California restaurants closed permanently.

Back to the Town Hall.

Next Biden lapsed into his usual gibberish, at first denying that combined federal and state benefits were killing the incentive to work and then saying, oh well, even if they are, the federal loot ends on September 6th and things should get better after that.

Until then, John’ll be in a “bind,” he said with a shrug.

This means employers paying less than 16 bucks an hour are no longer competing with each other to hire workers, they are in competition with the government, which has manipulated wages. This is no longer a free market.

As a result of government meddling, look for slow service and shortages everywhere at least until September.

This entry was posted in Labor & workforce and tagged COVID-19, Kerry Dougherty. Bookmark the permalink.