J.D. Vance, the “Childless Left” and the Commonwealth of Virginia Education Elite 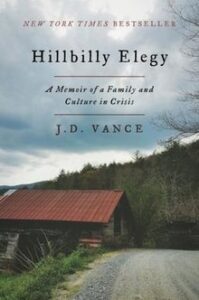 J. D. Vance, the author of the acclaimed biographical work “Hillbilly Elegy,” is a candidate for the Republican nomination in Ohio to replace retiring Republican Senator Rob Portman.

I haven’t studied that Senate race, and don’t have a favorite, but Mr. Vance has raised an issue for our time.

He has last week called out “the childless left” for their lack of “physical commitment to the future of this country.” From the N.Y. Post:

“The left isn’t just criticizing our country … it’s trying to take our very sense of national pride and national purpose away from us,” he said, blaming figures such as Vice President Kamala Harris, Sen. Cory Booker of New Jersey, and Transportation Secretary Pete Buttigieg, along with AOC, for stoking “cultural wars.”

“Harris has called herself the “momala” of her two grown stepchildren, Cole and Ella Emhoff.  Booker, Buttigieg, and Ocasio-Cortez have no children.”

“Vance offered a startling solution to what he called the “civilizational crisis”: extra voting power for parents.”

“The Democrats are talking about giving the vote to 16-year-olds,” Vance said.”

“Instead, he said, “Let’s give votes to all children in this country, but let’s give control over those votes to the parents of the children.”

“Doesn’t this mean that parents get a bigger say in how democracy functions? … Yes,” he concluded.”

I don’t agree with Mr. Vance’s broad prescription for calibrated voting rights.  I don’t think he does either. In fact I believe that Mr. Vance, a Yale Law School graduate, used that statement to bring public attention to the issue rather than expecting his specified outcome. But I think it may be appropriate to consider his point in a narrower context in Virginia.

Consider, if you will, the Virginia Department of Education and all of its tentacles.

When we look at the leadership of that Department and the Board of Education that sets policy for VDOE, what do we know about how much “skin in the game” key players have? Including the “expert” panels they assemble to help them draft policy.

The answer is that we don’t.

The brief biographies available on-line, even when they mention children and grandchildren, mostly do not specify whether those children went to public schools.

It is not just likely, but demonstrable, that some of the elected and appointed leadership in the drafting and passing of legislation and subsequent regulation of Virginia public schools are free to approach the issues with political rather than personal perspectives.

The only thing I suggest is that people who control K-12 education in Virginia be transparent about the specifics of their skin in the game.

Make the responses voluntary, but make that part of the format of biographies of each published on state websites. They can check “no response” if they wish.

And no, this is not “anti-gay” or “anti”-anything.

Transgender Del. Danica Roem, D-Fairfax, has been open about the fact that her boyfriend’s 9-year-old daughter attends public school and she has been active in that child’s school board.

Good enough for me.

See, that wasn’t so hard.