Shoplifting for Fun and Profit 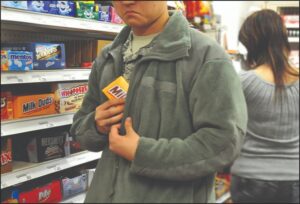 The Arlington County police digital police blotter contains a report of a shoplifting arrest made on March 28. At 6:02 p.m. police were dispatched to a store on Hayes Street where an employee had confronted a man for concealing merchandise in a bag. During the course of the police investigation, the suspect provided false identifying information, acted in a disorderly manner, made threatening statements, and spit on an officer. The police arrested him and charged him on multiple counts.

It turns out that the individual in question, 24-year-old Ronald Thomas of Brandywine, Md., had been served with outstanding warrants in a previous incident in the City of Fairfax. Thomas and another suspect had entered the Ulta Beauty store there with duffle bags and filled them with merchandise before fleeing in a car.

Perhaps incidents like these have been occurring for years, decades, without anyone paying attention. It’s not as if Thomas shot or stabbed anyone. Perhaps these incidents are absolutely nothing to get exercised about. Or… perhaps the incidents are indicative of a troubling trend of California-style social “justice” — and attendant social disorder — coming to Virginia.

I was roundly mocked back in March back when I described a shoplifting incident in Fredericksburg in which two males and a female entered a store — also an Ulta Beauty store — and took off with $15,000 worth of merchandise. (Perhaps Thomas was one of the individuals. I don’t know.) The incident resembled similar heists in California, where shoplifting has morphed into large-scale organized crime. And it occurred in a locality where a newly-elected Commonwealth Attorney had campaigned on promises to reduce “disproportionate harm caused to Black and brown people by the criminal justice system.”

Now the Washington Free Beacon tells the rest of the story. Thanks to bail reform policies implemented by “progressive” prosecutors Steve Descano (D) in Fairfax County and Paris Dehgani-Tafiti (D) in Arlington County, Thomas spent virtually no time in jail, leaving him free to commit more crimes. In between his Virginia cases, Thomas was charged with theft, robbery and assault in Maryland. Reports the Free Beacon:

The Free Beacon quotes Attorney General Jason Miyares (R) as predicting dire consequences. “You can’t claim crime has decreased when you’ve also bragged about not prosecuting over 20 types of crimes,” he said. “The crime hasn’t gone away—only the prosecution…. Just because a crime is ‘nonviolent’ does not mean there was no victim or that no innocent life has been affected. These far-left prosecutors repeatedly dropped charges against a serial larcenist and allowed him to commit more crimes and victimize more Virginians because they prioritize ideology instead of public safety.”

It’s too early to say if Thomas is an outlier. We can always hope that he and others like him feel profound gratitude for the grace bestowed upon them by socially conscious prosecutors, see the error of their ways, and take up honest work. But it’s also possible that petty criminals will make the rational calculation that shoplifting will go largely unpunished — especially in jurisdictions with lenient prosecutors — that shoplifting is easy money, and that shoplifting will grow in Virginia into the scourge that it is in California.

The usual suspects will pooh-pooh any such suggestion — there hasn’t been a noticeable uptick in shoplifting, the crimes are so trivial they don’t matter anyway, and in any case the laws are racist and conservatives who draw links between progressive prosecutors and George Soros, who financed their election campaigns, are anti-Semitic.

Well, we shall see when crime statistics are updated. The descent into anarchy doesn’t occur overnight — it takes time for the criminal element to absorb the entrepreneurial opportunities presented by progressive prosecutors. But if history is any lesson, if you don’t punish criminals, you’ll get more crime.

This entry was posted in Crime , corrections and law enforcement, Uncategorized and tagged James A. Bacon, Social breakdown. Bookmark the permalink.