Shocker: After Years of Identity Politics, Hate Speech Is on the Rise in Loudoun Schools 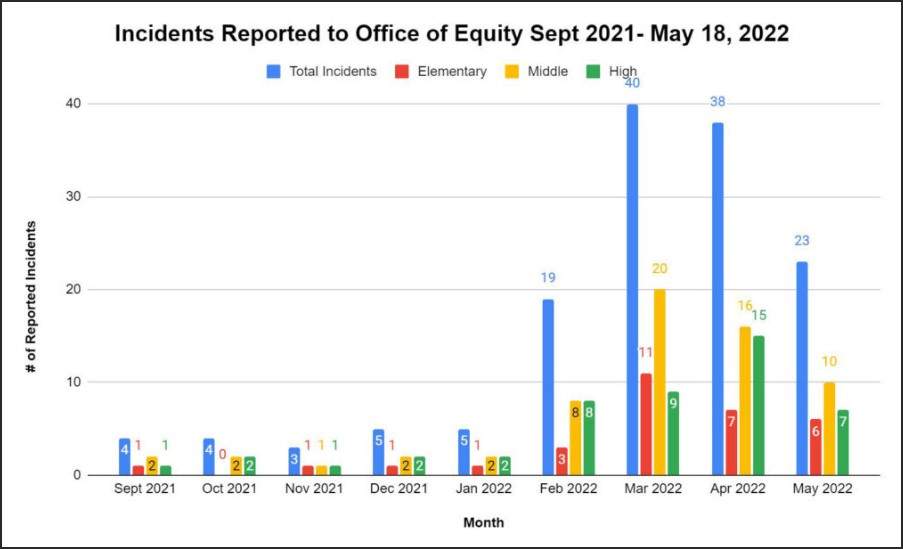 Racial slurs and hate speech are on the rise in Loudoun County Public Schools, according to data released by the school system. Forty incidents were reported in March alone, although the monthly numbers have declined modestly since then.

“They have clearly spiked, particularly since February, and continue to be high,” Deputy Superintendent Ashley Ellis told the school board Tuesday. “This is very unsettling data to see.” So reports WTOP News, among many media outlets.

Yes, it is unsettling to see such a spike, especially considering that reports of hate speech were extremely low — three to five incidents monthly — earlier in the school year. Numerous questions arise, the foremost of which is why. Why has the incidence of reported hate speech exploded? Have Loudoun County schools turned overnight into hotbeds of racism? If so, what does this tell us about the effectiveness of the school board’s years-long effort to expunge racism from the system? Clearly, it’s not working. Indeed, it would appear that the school board’s aggressive “anti-racism” policy has proven spectacularly counter-productive.

Perhaps the lesson is this: if you want to end racism, stop talking about race.

Loudoun County’s school board has been obsessed with race, and it has transmitted that obsession to administrators, teachers, students and parents with endless talk about racial equity, White privilege, Black victimization, and all the rest of the leftist catechism. It is fair to say that the Loudoun school community is far more race-conscious than it was a few years ago. As the political hyperbole of school officials and parents ratcheted up, it should surprise no one that students’ unfiltered, adolescent language would reflect those antagonisms.

What the WTOP article does not attempt to explain is why did the spike occur in the beginning of 2022? I expect some people will suggest that the election of Governor Glenn Youngkin gave people license to freely express their inner racism. However, Youngkin campaigned on promises to rid schools of “inherently divisive concepts” — in effect, to tone down the rhetoric. Furthermore, I have seen no evidence to suggest that hate speech has spiked anywhere else other than Loudoun.

Rather, I would look to a change in rhetoric that was occurring in Loudoun County itself. What were the issues playing out in school board meetings and other public forums early in the year? Could they have played a role?

Another possibility is that the increase in reports did not reflect an underlying change in behavior at all, but was an artifact of Loudoun School policies that encouraged the reporting of incidents that otherwise would have been ignored. Did the administration amp up publicity for its Protocol for Responding to Racial Slurs and Hate Speech in Schools? Did principals start urging students to report hate speech? Alternatively, did the administration expand the definition of what constitutes a “racial slur” or “hate speech” so that more incidents counted? These questions are worth answering before drawing hard-and-fast conclusions about the state of race relations in Loudoun.

Could the Protocol itself be part of the problem? One approach to dealing with the use of a racial slur would be to call the offending kid into the principal’s office, give him or her a dressing down, and notify the parents. But in Loudoun County, such a response would be just the beginning. Aside from notifying parents, the administration would “investigate the incident,” “denounce the act within the school campus and broader school community,” and then provide “social-emotional support for the student harmed and known witnesses” by involving the school’s mental health team. The offending student would receive “a disciplinary sanction” and “complete a reflective lesson related to the incident.”

Under the Loudoun protocol, racial slurs and hate speech are to be treated as traumatic events. Schools have Unified Mental Health Teams comprised of counselors, social workers, psychologists, and student assistant specialists. Depending upon circumstances, they can meet with the “harmed” student — and that includes witnesses to the hurtful words — provide support “until the particular level of care” is no longer deemed necessary, work to repair student relationships, initiative restorative circles, interact with parents, and pursue other actions.

It is easy to imagine one or two incidents doing so much to raise race consciousness that it creates a cascading effect.

The natural inclination of most Americans today — especially Americans from highly educated, higher-income families like those in Loudoun — is to ignore race and treat people as individuals. If you polled Loudounites on issues of race, I am confident that they would be as race-blind as anyone in America. But far-left progressives don’t want a race-blind society. They want to re-engineer society in line with their ideals, and identity politics, and racial grievance is their path to power. They will never let it go.

It’s a good bet that the progressives running Loudoun’s schools will use the latest hate-speech numbers as justification for doubling down on policies to extirpate racism. I can assure you, such policies will accomplish the opposite of what’s intended.