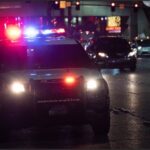 In the wake of the horrific mass shooting in Highland Park, Illinois, it’s clear that the massacre might have been avoided if the suspect’s parents had done their part to keep weapons out of the hands of their clearly deranged son.

The suspect, Robert Crimo III, has reportedly confessed to the atrocities that left seven dead and dozens injured at an Independence Day parade. One toddler was orphaned by the shootings..

In an interview in Thursday’s New York Post Crimo’s father said he felt no guilt even though he sponsored his son to buy a firearm three months after he was declared a “clear and present danger” by local police for threats to kill his entire family.

“They make me like I groomed him to do all this,” Crimo’s father said of critics. “I’ve been here my whole life, and I’m gonna stay here, hold my head up high, because I didn’t do anything wrong.”

Contrast that with what happened in Richmond where police say a concerned citizen overheard a conversation about a planned mass shooting for the 4th of July at the Dogwood Dell celebration and notified the police.

Homeland Security sprang into action and two illegal aliens from Guatemala were arrested and charged with possession of a firearm by a non-citizen. A number of weapons and a large cache of ammunition were seized on Friday from the home the men shared in South Richmond.

Richmond police and the mayor were ebullient this week, pointing out that a “hero citizen” had saved lives and foiled a massacre.

Law enforcement deserves credit for taking the tip seriously and working quickly. The governor applauded the tipster and the police:

“I want to thank and applaud the hero in Virginia that stopped a potential massacre by alerting our brave Richmond Police Department Officers that work tirelessly every day to protect our communities. It’s a great reminder that if you see something, say something to your local PD.”

But here’s the rub: Bail for one of the illegals was set on Wednesday at a mere $15,000. Julio Alvarado-Dubon, 52, who’s lived in Richmond for three years and works construction was the beneficiary of the court’s largesse and it’s unclear if he remains in jail.

Why would he be eligible for ANY bail if claims that he’s in the country illegally are accurate? Surely anyone here illegally should be considered a flight risk.

Secondly, there is no word on whether his employer has been charged with employing an illegal worker, but if history is any predictor that won’t happen. Until we get serious about punishing employers who hire those here illegally, American immigration laws will continue to be an international joke.

Alvarado-Dubon’s partner, Rolman Balacarcel, 38, was arrested in Charlottesville and is being held without bail there. He could be back in court today, however, perhaps seeking bond.

Look, it’s imperative that anyone who believes someone is about to commit an act of violence report it to law enforcement. Just as it’s also important for illegal aliens to remain in custody when they’re charged with crimes.

If Richmond police accounts are accurate, a quick-thinking private citizen saved untold lives on the 4th of July in the capital.

That’s reason enough to celebrate during a week of horrific news.

This entry was posted in Crime , corrections and law enforcement, Uncategorized and tagged Kerry Dougherty. Bookmark the permalink.